First Buyer of "The Broken Shield" 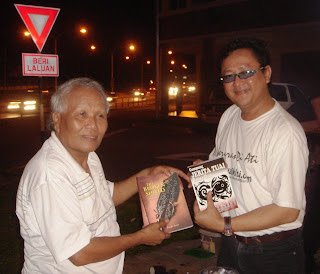 Mr Johnny Chuat, from RuaiKitai.com was the first person to buy The Broken Shield. He came all the way from Bintulu just to meet the author, Mr Joseph Tawie and get him to sign the book at First Family Cafe, Kuching.

Meanwhile, Mr Johnny Chuat who is also the Managing Director of Pegari Iban Production in Bintulu has been appointed as one of the Marketing Agent to promote and sell the book. Those staying in Bintulu who are interested to purchase the book can contact Mr Johnny at 019-8758576 or email johnny@pegari.com.my. 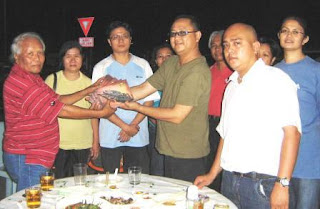 (Pic) Mr Johnny Chuat (right) received copies of the book from Mr Joseph Tawie during an informal gathering at First Family Cafe (FFC) in Kuching on 23 Dec 2007 while others look on.
Posted by Jetty at 11:29 AM 2 comments:

Launching of "The Broken Shield" 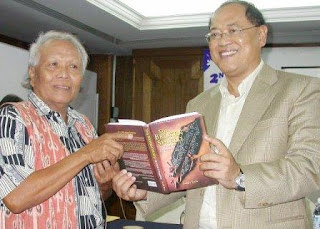 ‘The Broken Shield’ which was soft-launched on 16 December 2007 during the Dayak 21st Century seminar and workshop is the latest book written on Dayak politics.

Authored by Joseph Tawie, a retired civil servant, the book attempts to cover political events from the author's perspective and knowledge.

It is about a journey or a "roadmap" of Dayak political unity from the day Sarawak gained its independence until this present day political scenario. Along the journey, the Dayak unity was persistently being undermined. Their hopes and struggles were constantly being frustrated either by the Dayaks on their own out of personal greed and jealousy or they worked in collaboration with others whose interests were detrimental to the Dayaks' political struggles.

The book is so titled 'The Broken Shield' because the shield is more than a Dayak warrior's weapon of self-defence against all weapons of enemies and which symbolises the unity, strength, struggles and hopes of the Dayak Community. And for this reason, the shield has been incorporated into the logos or symbols of all Dayak-based parties like SNAP, PBDS, SPDP and PRS. Even Pesaka, which merged with Bumiputra to form Pesaka Bumiputra Bersatu (PBB), to this day still continues to retain the shield as its emblem to reflect its aim of protecting the Dayaks' interest in PBB.

Figuratively speaking, the shield breaks into pieces in its efforts to protect the Dayaks' unity, interests and rights, and its bits and pieces have been scattered all over the place. Translated into modern day politics, ‘The Broken Shield’ reflects the Dayaks' profound disunity while its fragments represent each and every one of the Dayaks who are divided and scattered among the existing political parties in the State.

Although PBDS had submitted its application to rejoin the BN coalition five months ago, some of its leaders were cautious about the application and were sitting tight as they waited anxiously for the State government to decide.

The questions uppermost in their minds were: what should they do if the application was not accepted by the BN3 coalition? Who would fight the PBDS future battles? Should they commit the PBDS machinery to the State government cause before or after coming onboard? Or should you ask your “troops” to go to the other side until you are definitely sure you are going to be friends and not enemies anymore?

This was the situation that PBDS was in. It must be admitted that there were members who were not happy of rejoining the BN3 government, when the party’s bargaining power was practically nil. They said that the leaders only talked about political reality, but they forgot about political strategies.

In the meantime, the State Barisan was giving PBDS till the end of March 1992 to “prove” its sincerity in wanting to rejoin the BN3 coalition. The decision would then be made after the six-month “cooling period”. Taib said: “It is just after the elections. We will give them time. We will wait and see what efforts they will make for PBDS to rejoin the BN with a sincere heart and not a tactic to sabotage the BN.”

Taib stressed that the Sarawak Barisan wanted political parties to reduce politicking and work towards achieving greater development in the State. This could be realised if there was greater consensus among the political parties.

And to achieve a greater consensus and development, it was appropriate to bring the Parti Bansa Dayak Sarawak back into the State Barisan, although it had enough political strength. “However, PBDS must first show its sincerity and observe the BN discipline,” he said over RTM.

SNAP, a member of the BN coalition, had expressed its decision to oppose the readmission of PBDS into the coalition, because in accepting PBDS, SNAP would be weakened, said Peter Gani, secretary-general at the National Council meeting of the party. He suggested that as members of PBDS were ex-members of SNAP, they should rejoin SNAP individually.
Posted by Jetty at 1:07 AM 2 comments:

Excerpts from Chapter 6: Tajem's Version of the Ming Court Affair

According to Tajem, he was about to attend a Parliament meeting on 9 March 1987, when his secretary George Entigar called him, informing him that there was an urgent meeting at the Ming Court. Instead of going to Parliament, he went to the hotel where he saw so many Sarawakian politicians. Moggie and secretary-general Edmund Langgu were among them. He went to see Moggie, who explained to him what transpired at the hotel. Then he was advised to go to Rahman’s residence.

At Rahman’s house, Tajem met many more Sarawak State Assemblymen and politicians. Rahman told him that the majority of elected representatives from PBB, SUPP and SNAP and even one or two from PBDS had agreed to pass a vote of no confidence in the leadership of Taib Mahmud.

Tajem told Rahman that they could not and should not do it especially in Kuala Lumpur, as it was not proper, adding that the proper place to pass such a vote was in the Council Negeri. Rahman told Tajem that they did it to Stephen Kalong Ningkan 20 years ago, and there was no reason why this time it could not work. After all, the Federal leaders were behind them.

When Tajem left for the Ming Court, Rahman passed him RM30,000 wrapped up nicely. Tajem did not ask what the money was for and passed it to Paul Kadang.

Tajem again met with Moggie and Langgu and expressed his unhappiness with the way he was sidelined or kept in the dark on a matter of such importance. By this time, Moggie and Langgu were not only deeply involved in the plot, but had also signed a “no confidence” document. Initially Tajem was reluctant to sign the document until and when Moggie threatened to resign as president of PBDS, and only then did Tajem affix his signature.

“I have to sign the document in order to prevent PBDS from breaking up,” he told the writer. Moggie only admitted his big mistake in joining forces with Rahman 20 years later and all this while Tajem was blamed for being one of the “pioneers” of the Ming Court Affair. But Tajem being Tajem accepted the blame.

Tajem left the Ming Court and disappeared. He refused to let people know where he was and admitted to some of his friends that what Moggie and Langgu did was wrong. It was also wrong for them to gang up together with Rahman. Personally, Tajem tried to distance himself from Rahman partly because of a failed business deal worth few hundred thousand ringgits and partly because Tajem was unsure whether the quarrel between Rahman and Taib was real or not.
Posted by Jetty at 10:29 PM No comments: