Dayak Ministers do not support DAMA

The efforts by the Dayak Chamber of Commerce and Industry (DCCI) to introduce Dayak Music Awards (DAMA) which was held on 27 September 2008 at Crowne Plaza Riverside Hotel, Kuching in recognition of Dayak musicians – singers, composers and lyricists – were both noble and commendable.

Presented after the style of the most prestigious Grammy Awards, DAMA hopes to inject quality and professionalism among the Dayak musicians. Hitherto, some of the so-called Dayak songs lack originality as they are copied from Malay, Indonesian and Hindustani songs with many of them having Malay words used in the lyrics. Let me give an example: “burong punggok nyabak ka bulan” which should have been “burong tunggok nyabak ka bulan” in Iban; “selindang” should have been “selampai”, etc.

There again the Iban and Malay spellings are mixed up. For instance, “baka kucing enggau cit” should have been “baka kuching enggau chit”. And there are many examples of these mixed-up spellings in CDs, VCDs and DVDs. The Malay spelling does not have “ch”, while the Iban spelling maintains the “ch” in order to differentiate between the systems of spelling.

In an attempt to really raise the quality of Iban songs in particular, a body or a committee should be set up to look into all these “impurities” in Iban songs.

If this body can be set up, then the Dayak music is not only an art and a form of entertainment among the Dayaks, but also it is a big money-spinner. Imagine we have eight million Dayaks throughout Pulau Borneo as possible clients. Some non-Dayak businessmen have seen these prospects and have indeed taken advantage of some of Iban singers especially those in Sibu by paying them about RM600 for a recording. While the Iban singers are only interested in making them “famous” and popular, the non-Dayak businessmen have earned millions of ringgit through the sales of their songs. Again a body should be set up to look after the interests of the singers.

As I said the DCCI’s efforts are commendable and should be given all out support. But sadly, there seems to be lack of support coming from the Iban businessmen and Iban ministers and assistant ministers and the absence of William Mawan, James Masing, Alfred Jabu, Joseph Entulu, Sylvester Enteri, Jelaing Mersat, Francis Harden, Gramong Juna, Peter Nyarok and Douglas Uggah were obvious. Only Michael Manyin, Naroden Majais and Joseph Salang were seen around. Never mind Jabu, but what about the rest? We know Jabu has always against the formation of DCCI and its activities. 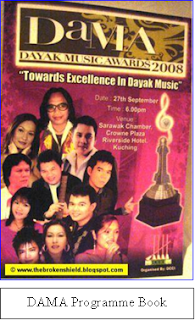 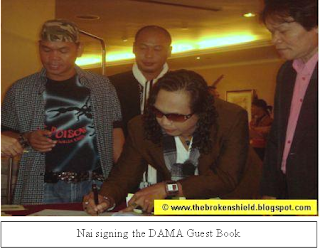 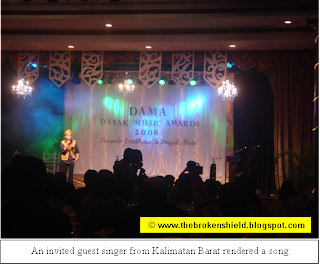 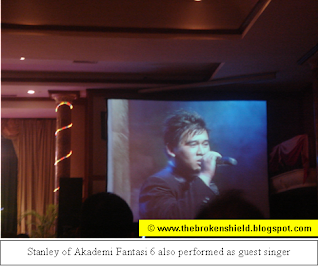 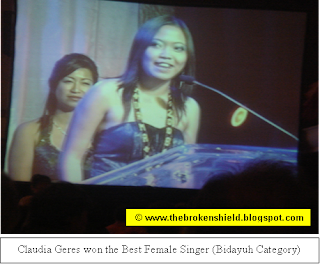 Fully agreed. Reckon they just dont bother or just oblivious to events happenings around them.Whats there for me? Dayak leaders we have now are very very far cry compared to Dayak leaders of yesteryears!Its the COMFORT ZONES syndrome! Why bother?

Kategori Orang Ulu maioh diempu Urai laban ia the one and only nominee for the most of the categories.So she can be the best,(or the worst!).Patut drop aja categories keh mina siku aja nominee baka nya,beri aja recognition for her contribution for the music scene and her effort to summit her entries,and keep the awards for the coming years.Frankly speaking,Orang Ulu scene bedau cukup besai/bersedia for a competition amongs themself.
(for those who were there,if you observe enough,you can see the weird look on the VIP's face everytime these 'one and only nominee' categories result are announce.)

Duit sponsor ari sektor koporat nyau RM250K,and that the best stage you can do?
And with that money,why don't DCCI hire an event management company to do the show,instead of the committees themself which are the organising team.Yes,you can DIY but not for the first year which you have to make a very good impression for the first time(and get more sponsors and coverage next year).

And of course,the JUDGES are very questionable their credibility(and don't forget the conflict of interest may play some part there).Judges shouldn't be from amongs the committees and absolutely not Elvis Impersonators!
Where is Patrick Khamis,Kia,Deja Moss,Camelia,Dayang Nurfaezah and our other qualified names?

DAMA have official newspaper,Borneo Post,so maybe next year you can do readers voting for the shorlist/finalist for the judges.

And separate/independent body which is qualified to do the filtering for the originality of song/music.Statutory declaration as required by DAMA is not enough since anyone can go to a law firm and get one for a cost of RM5 each.

A lot have to be done next year(right way,right people).
All the best for DAMA 09.

There should be a post-mortem soonest possible by DAMA 2008 Committee Members taking into account the comments and suggestions put forth by Kelimbak and the others.

I totally agreed with KELIBAK,enda ibuh aku nyebut semua utai ti udah disebut kaban kitai kelimak,ninga sapa bala Judges nya udah cukup.Conflict of interest is the main issue here.Category of awards is not right.How could DAMA allow OLD ELvis impersonator to he judge for the awards?WE dayak are living in a modern era nw.People listens to modern melodies and talk about quality production.Ukai semina jenny tan abuse the dayak singers,ANDERSON kaparai is worst then the chinese production companies,because he learn from tne chinese how to cheat or ngemelik ke IBAN.DAMA should look into this matter.

there are a lot of things that i want to say about our Dayak Music Industry especially the IBAN MUSIC industry.
firstly, our music industry is not developing. it stays at the same level for so long. everyday in the radio we will hear the same tune, almost same lyric (except that the other song is about reply to another song that has become hit such as 'tusah belaki nguai' from swailyn and the reply 'badu sebana nguai-if im not mistaken- by achan, apek, apek 2 by johnny aman and angela lata jua, and the same genre of music- music which is loved by people who like to poco-poco during weekend after their drinking session. sometimes i think that in our music industry there is no such as R&B, hip hop, ballad, rock (there is some attempt-but i don't think it has succeed- Embat Lala and Obie Boy-'politik rumah panjai') all things are the same. it's kinda boring and it is indeed boring actually. therefore, i would like to encourage the iban composers or other people who involve in this isdustry to be more creative and they have to break all the walls that block them to go further in this industry.
secondly, our singers or the producers have the tendency to copy or translating songs from other non-local singers such as James Ruai who have the Iban version of an Indonesian song-Pulai meh Sulu. there are a few songs that i can't think right now. come on... be more creative.
then, we also have to take note on how the video clip of the songs are done. everytime, it is the same setting, at a recretional park such as taman awan miri, or landmarks. hmmm... its BORING. try make some like what ERNESTO has done. the clips are maybe from personal collection. but i think it is creative and unique on its on.
i do not want to be bias toward this industry. i realize that there are talented singers,song writers and directors. i like listening to jerry kamit, ernesto and ricky anderson because their presentation of songs and mv are different. for instance, songs by ernesto really not so Iban. it has their own identity even both are slow, easy listening songs. they dont have the typical iban song beat, even the lyric are nicely arranged. example of the songs are seribu satu, sagam ati and di pintu sebayan.
and honestly, i love oldiest singer such as Paulin Linang, Edward Kuju, Nelson Nehru and not forgetting Christoper Kelly. they are versatile singers ahead of their era.
and not forgetting that some of the spelling are inappropriate. and the singer who always uses wrong spelled title of words in the lyric and even in the mv is andrewson ngalai. for instance - pikil dulu sulu instead of Pikir Dulu Sulu and Menaur Lapar instead of Melnail Lapar.
i would like to apologize for words that i've been used and i know that my though may bring uncomfortableness to certain people. as a young people a really want to see our music industry to develop and to grow from their current state.