Who are the "political scorpions"? 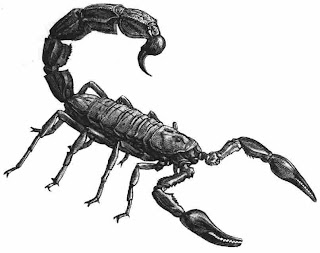 The other point that I did not include in my Malaysiakini story (see my story below this article) on the SPDP press conference on 18 July was that Mawan was blaming the Dayaks for the disunity that we are in today, starting from the split in SNAP in 1980 during which PBDS was formed, and in the 2002 SNAP crisis during which SPDP was formed; again in 2004 PBDS crisis after which PRS was formed and lastly in the PRS crisis (2006-2008) which almost led to its demise.

We have in the past as well as in the present heard of the term “political frogs” to describe politicians jumping ships. But Mawan likened some Dayaks as “scorpions” moving around and poking people left and right.

“And if you are a scorpion, people will not like you because you are not a smooth creature,” Mawan said.

I am not so sure whether the Dayaks are or were like scorpions or behaving like one. If you look back into all these crises, there was one common denominator: a Chinese towkay was involved one way or the other.

# SNAP’s first crisis in 1980 was because of James Wong who insisted that he must be made the president of the party upon the resignation of Dunstan Endawie (refer to the first volume of The Broken Shield) and Leo Moggie and Daniel Tajem said that since it was a Dayak-based party, the president should be a Dayak. With the help of other Dayak leaders, Wong’s camp defeated Moggie and his group.

# With that victory, Wong behaved a like a dictator in the party and did not brook any criticism to his leadership. Anyone trying to talk about Dayak interests in the party was told to leave the party and form his own racial party. One of those who were very vocal about Dayak issues was Tajem. Wong found an excuse to expel Tajem from the party by accusing him of supporting an independent candidate in the 1982 parliamentary election. His expulsion led to the resignations of several DUN members and MPs from SNAP, who later formed PBDS in September 1983.

# SNAP’s second crisis in 2002 was due to a quarrel between Wong and the MP for Bintulu Tiong King Sing over a TV3 project in Bintulu. The bitter feud led to the expulsion of Tiong from the party. His expulsion was strongly objected by leaders like Mawan, Nyarok, Sylvester Enterie and six others who resigned and formed SPDP. Due to the quarrel SNAP was deregistered, but it is still given a stay of execution. (Tiong owed much to people like Mawan and eight others including the late Peter Tinggom and the late Dr. Judson Tagal for “saving” him).

# Therefore, I was surprised to hear Tiong shouted at all the SPDP leaders during their last meeting, treating them as if they were small children. His loud voice was overheard by many of us – the reporters. We heard him saying: “I spent my bloody money on this party, so do not do that to me ……”)

# As for PBDS crisis in 2004, it was James Masing and again a non-Dayak in the person of Sng Chee Hua was involved. Masing and Sng challenged Tajem and Joseph Salang for the top posts. In their determined efforts to be president and deputy president, they made a lot blunders such as having their own TDC in Bintulu leading to the creation of two “presidents” with two sets of supreme councils and two headquarters. Because of this, PBDS was deregistered. (More details will be revealed with the publication of my second volume of The Broken Shield which will out very, very soon).

# The PRS crisis from 2006 to 2008 was again due to Sng Chee Hua who wanted to topple Masing as president and later his son Larry. But Masing played his game very well and has gotten rid of the Sngs from the party. Now PRS is almost one hundred percent Dayak party, led and financed by Dayaks themselves.

As for SPDP, its future is in the hands of one man – Tiong and we have heard of rumours that he may go for the two post in their TDC this November or even for the number one post.

As Mawan said, SPDP was a democratic party and he expected contests from “top bottom”. Thus Mawan should know better than many of us as to who are the political “scorpions”. But the question I would like to ask is: Can SPDP survive from the sting of the "scorpion"? - The Broken Shield

Talks of a merger between two Dayak-based parties Sarawak Progressive Democratic Party (SPDP) and Parti Rakyat Sarawak (PRS) remain as talks only as the two sides have not met officially since the proposal was made in 2005.

"The talks of merger are still on, but we have not met," admitted William Mawan SPDP president after a supreme council meeting yesterday.

"Even though the merger remains illusive, we have other ways of strengthening one another on the ground. We must be seen together first and demonstrate we work to help one another," he said.

Asked if there were any obstacles, Mawan said: "There are no obstacles and as far as I am concerned, I am prepared to step aside in order to allow some one to head the new entity."

"We are very committed to the idea of a merger," he said, adding that there was no time frame for it to be realised.

The merger talks between the two was said to have been proposed by Chief Minster Abdul Taib Mahmud in 2005 in order to strengthen the two parties especially following the de-registration of Snap and PBDS in 2002 and 2004 respectively.

Sources close to Taib said that the chief minister did not want to be seen as having a hand in the de-registration of the two-Dayak based parties.

But when the idea of a merger was proposed to strengthen 'Dayak unity', Chinese leaders of the two parties called for caution, because any move to merge must be done with great care.

Tiong King Sing, SPDP treasurer general, who was very much against the merger, was reported to have said: "There is no point to merge, if we have to quarrel over who should be the president and who should hold important posts."

"There is no point to merge if at the end of the day, both sides get embroiled in the fight for top posts. If this happens why should we rock the boat?" he asked.

Sng Chee Hua, who was then PRS deputy president, was also reported to be against the merger, saying that some had to make sacrifices if the merger went through.

"No doubt, there will be a bigger room, a bigger boat, but the question is who will be its captain," said Sng.

Now Sng is no longer with PRS and yet PRS is hesitant about the merger, although publicly it is for it.

According to a PRS supreme council member, PRS does not want Tiong to be in the new entity.

"PRS will closely watch SPDP's triennial delegates conference to be held in November this year and the role Tiong is going to play in the party.

"Because of this, PRS' own conference has to be delayed by a year," he said, adding that the decision to merge or not would be known by then.

Merger PRS enggau SDPD.....jako aja. Tempat duduk ba ADUN belaya enggau pangan diri, saying ` I am most senior and my seat is here..yours is far there.

Don't know about scorpions but I do know that our political scene is full of venomous snakes the likes of Masing and Mawang.

Tiong has all the money he scandalised from the PKFTZ to manipulate the likes of Mawan, NYarok Entrie Abdullah and all in SPDP. Sinu bala iban- seneka ati orang ngaga, peturun apai saloi????

The Dayaks community are fed up to hear dayak politicians and dayak leaders talking about `disunity` among dayaks but none of them has tried any effort to overcome the problem. When the dayak leaders (ministers and elected representatives) themselves cannot be united, how do you expect both urban and rural dayaks to be united. As long as the dayak leaders continue to harbour enmity among themselves as a result of fratricidal conflict to fight over of political leadership in the past and compounded by self-interest, no way dayaks can be united.

Dayak leaders must be smart to get intelligence if there is any attempt or hidden agenda by selfish personalities to disunite and discriminate the dayaks. Because of disunity, some longhouses are divided. Rural folk forms factions and cliques. Are you happy to see that?