Tajem’s message to the Ibans 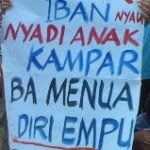 SERIAN: An adviser to PKR and former deputy chief minister Datuk Daniel Tajem (pic below)warns the Iban community that they will lose their native customary rights lands if they continue to elect the State Barisan Nasional coalition in the coming State election.

“Many Ibans in other parts of Sarawak have already lost their lands and we will continue to loose our land, if the State Barisan continues to govern Sarawak. 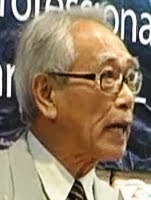 “In Balai Ringin we are about to lose our lands, when four companies linked to Chief Minister Abdul Taib Mahmud have been given provisional lease (PL) to plant oil palm in our lands.

“A total of 741,000 hectares of our NCR lands have been earmarked for this purpose,” he said, adding that the land owners had protested, but to no avail.

In fact, he said, he and the land owners have written to UMNO to intervene and stop the State government from taking away people’s lands.

Tajem said: “Lands are our only assets. And if we lose our lands, we will lose everything. We will become landless people. We do not know where to go except to seek refuge and sleep under a bridge.

“Landless People who sleep under a bridge are a common sight in other countries. And this will happen to us, if we do not change the State government,” he said, when he opened the annual general meeting of PKR Sri Aman division on Saturday, 24 April 2010.

“We do not change Taib Mahmud, but what we must change is the state government. So we must be united and work hard to change the government and only then we can prepare a new programme of development,” he stressed.

Tajem went on to say that Pakatan Rakyat must aim to win at least 36 seats out of 71 in order to take over the administration of the state government.

“Look how the federal government retook the Perak State government after the Pakatan had won it through the electoral process.

“Similarly what happened to Stephen Kalong Ningkan’s state government in late 1966, when he did not agree for expatriate officers in Sarawak to be replaced with Malayan officers?

“Thus, it is also very important that the federal government be controlled by Pakatan Rakyat,” he added. – The Broken Shield

During 2006 state election, the opposition front formed Barisan Bersatu Sarawak (BBS) to challenge BN, however it managed to win one seat at Engkilili while DAP won 8 seats. BBS`s issue in the last state general election was concerning problems with the Sarawak Land Code and Development of NCL in Sarawak.

For this coming state election, it is our hope that the leaders of Pakatan Rakyat will choose only good and trustworthy candidates unlike `frogs` mentality who everyday expose to the heat of the sun hoping to jump to another pond.

Tajem, when you are in the state gov't you went around telling people to vote only Bn and not PR.Now you try to sing a different tune to us. It's best if you go down to the people and start the change campaign to ready yourself for the change.
Barking from the air-con office is no good becos the rural folks won't get it.
We all know that cahnge is a must but it would be better that it happen now. So long have we been terrorise by this corrupted gov't but till now no one can have a master plan to change this gov't. i will be glad if Tajem can be Obama. We will see!

UMNO is one of them, they support each other no matter, be it good or bad things! UMNO is BN, and that makes PBB is UMNO, as PBB is also BN! UMNO can't even take good care of their own backyard, and the PKR Sarawak wrote letter asking for their assistance? So, why must they bow down by writing to UMNO? Doesn't that seems odd? Asking assistance from the enemy when in the first place they are found to be the root of all so called evil deeds? Just do what you do best, and never seek any aid from them, because they will never help unless they also gain a lot from it.

Dear Datuk Tajam.
It's too late now. All lands are already in their hands and there's no way to get them back even PR win and makes the state govt. Is it possible that your new govt pass a law to get back all the lost lands and freeze their assets/accounts. Do you know that brokers are selling big acreage PL some not even planted after logging for cash on behalf of biat? For your camp:
First of all, ask every Sarawak PR candidate to sign an agreement that he/she can be beheaded by anyone if the candidate 'were' to jump ship later. Secondly, ask every Malayan PR candidate to sign the same. BN candidates are free to jump. Hi, where are the dogs in SCA which helped making Sarawak a colony of Malaya?

i totally agree any PR candidate who is elected to stand for the PR must sign a valid declaratory affirmation to the effect should they jump party after winning the election on PR ticket should resign and vacate the seat. Jumping perty is an act of betrayal because the rakyat vote for you on the PR ticket, not on any other party. In the olden days you could be beheaded for treason.
If you jump ship in aconstituency where i vote, i will try to bring you to court because i didnt vote you to jump and join other party other than a party i vote for you! Stop fooling the rakyat!

The Dayaks must take the battle to regain the land they lost to Taib cronies to Sibu on nomination day and throughout the campaign period.

We must register our strongest protest on the blatant abuse of power by Taib and BN Sarawak to ignore Dayaks' customary rights over the lands they have farmed and handed down to younger generation for more than 50 years.

WE must be seen to be united in faith and believe in one true God for His blessings and wisdom to be united in common interest and visions for our people. WE must protect our land from been taken away by the rich and powerful because the state land code are not protecting us.

Please read and sent this message to kampung people in Sibu area and let them know what BN is doing. Passage from Malaysian Mirror.

KUALA LUMPUR - An RTM TV2 producer had his documentary on the Bakun Dam taken off the air for political reason, it was alleged on Wednesday in a blog post by Chou Z Lam who produced the documentary.

Joshua Wong, an award-winning journalist, had said that the ban imposed on his talk show from discussing the recent Hulu Selangor by-election was "the last straw".

Chou's nine-part documentary was for a RTM2 programme entitled "Galeri Mandarin Nasional" and was supposed to have run from last Monday to May 7 in the 12.20pm to 12.30pm slot. The first two episodes have been aired.

Chou claimed the show was taken off the air under the direct instruction of RTM's chief broadcast executive Ibrahim Yahya. He was told the documentary would be postponed to "a more appropriate time."

In his blog post, Chou also said RTM's newsroom chief executive Jumat Engson told him the documentary "had sensitive elements that could be harmful (for BN) in the upcoming Sibu by-election as well as the Sarawak state elections."

The documentary that was taken off the air, according to Chou, focused on the social impact of the building of the Bakun Dam on the natives of Belaga who were forced to relocated to Sungai Asap and Sungai Koyan in 1998.

"This is another news interference by the government during and after the Hulu Selangor by-election," Chou wrote on his blog.

"I feel deeply sorry for the people of Sungai Asap whom I had interviewed, as their problems and voices are being prevented from being heard by the majority of the people both in East and West Malaysia," he added.

"If the Sibu by-election and the Sarawak state election are reasons for the show to be taken off the air, then what RTM is implementing is actually 'politics first'", he said.

Chou appealed to Ibrahim to reconsider his decision "for the sake of RTM's credibility and the natives of Sarawak."

hahahaha let Dayak work as slaves on their own land..Dayak don't even have land to bury their people ke dah parai as what happen in Miri last week...ehh..where are those so called Dayak NGO, SADIA, SDNU, SIDS DAm etc...?? well, Dayak NGOs only good in organise Pekit Kumang /Keling,music, karaoke, dinner & drunk...stupid Dayak..after the problem surface then they said this & that & post it in newspaper what they will do next..Dayak YBs? pelir...mentality Dayak sigi enda berubah..shoohh..shoohh..kin kitak Dayak nyadi ulun hahahaha