Bashed for defending his own land 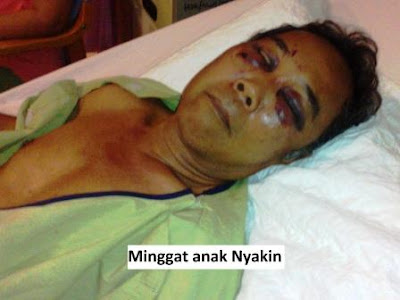 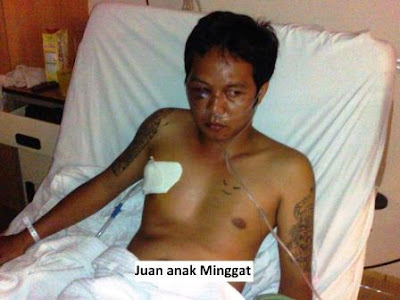 This is a tragic story of a farmer Minggat anak Nyakin and his son Juan trying to defend his NCR land were bashed of by intruders and loggers. Minggat’s case is only a tip of the iceberg; some suffer by being arrested by the authorities.
Yet others who are so scared suffer in silence. But there are those who dare to stand up for their rights, especially those of Rumah Ranggong, Ulu Niah. Instead of being scared, they dare to challenge gangsters sent by an oil palm company to intimidate them.

Minggat anak Nyakin who has a parcel of NCR land at Sungai Rotan and Sungai PenyaruKuba (Kiba) Sarikei found out the hard and excruciatingly painful way that standing up for his rights is no easy task and which almost cost him his life.

“Not only he was badly beaten up, he was also arrested by the Police,” said Ngumbang Anak Barau, of Tahabas (Native land Owners Network). (This story was published by Free Malaysia Today).

He said that on the evening of 14 February 2011, Minggat and his son Juan had gone to their land to check on the outcome of an alleged illegal logging over their NCR land at Sungai Rusa, Sarikei.

They had previously reported the alleged illegal logging over his land to the Police, the Lands and Survey Department as well as the Public Works Department back in December 2010 for investigation.

Upon finding that the logging has continued seemingly unabated, they decided to drop by the log-pond late that Monday evening and tried negotiating for compensation with its manager.

The negotiation went sour and before Minggat and his son could leave the office building, they were initially attacked viciously at its footsteps.

“Although badly hurt, his son managed to escape in the darkness towards a nearby oil-palm plantation, while his father was left in an unconscious state at the foot-steps of the log-pond manager’s office,” Ngumbang said.

He said Minggat and Juan are now admitted at the Sarikei Hospital, with the police guarding them as they are both being remanded.

“Regardless of any wrong-doings or crimes that Minggat or his son may have committed, the source of the problem has yet to be investigated satisfactorily by the authorities.

“Minggat’s family agrees that Minggat should be fairly investigated, and so does the timber company that has been operating for many years on NCR land allegedly without a relevant or valid licence.

“The alleged illegal logging seems to be proceeding unhindered thus far. A police report has been lodged by Minggat’s wife yesterday on 16 February regarding the attack. The attackers have not been arrested,” he said.

As of today, the name of the timber company which owns the log-pond remains unknown to the rest of us, while there is no telling when investigations will be made on Minggat’s and his son’s attackers.

“What is certain is that Minggat and Juan will remain hospitalized for a few more days or even weeks.

“Today, their pains are too debilitating for them to even ponder what they will do next.” Ngumbang added.
Posted by Jetty at 12:59 AM

What say you Jabu,Mawan,Masing and the other "great Iban Leaders"?.Are you going to urge the authorities to properly investigate both parties or the Ibans have NO NCR land? come on,say it out!.

The father and the son were arrested and remanded by the police suggesting that they have committed crime? What offences?

But then whoever assualted them could not take the laws into their own hands. So based on the report lodged by Minggat`s wife, the police have to investigate the case without fear or favour and bring their assailants to justice.

Send their photos and that of others before them who were beaten up too by gangsters well connected to Taib and his cronies, to all Dayak YBs ,Tuai Rumah, Penghulus and Dayak NGOs. Let them search their conscience as to why they are still supporting BN and Taib to stay in power.

Wake up Ibans! Your voice/vote is majority! Do something?

This is too much, so Dayak Iban YBs all of you're shameless guys, no balls, talk shits all the time during colony time we lived so happily but now under BN it's hell.

Last Friday IBAN in Sg. Tenggang, Tekuyong, Abok, Limau, Dadak Aping won their NCR court case thanks to Dato Sri Daniel and YB Dominique Ng for their good work. But of course the morons will appeal, so for now LCDA, Kim Lung should leave and go away, no more rights on their land, the Police should chase them without fear or favour.

The father and the sons of Iban community were badly assaulted by the workers, agents or staff of the logging company. Is it the value of logging sector means?

What say you Jabu, Mawan and Masing? Are you happy to see your own community tortured like animals by the logging company?

This coming election, vote those Dayak idiot YB's out.

80 percent of Dayak votes for Pakatan Rakyat. 20% are relatioves and parasites of Dayak Ybs in BN. If you truly care, vote for change and vote out those mafias and thieves.

I bet you that nothing will happen to those bullies. The poor will remain poor. The only way to help these poor victims is to vote for change..

Time for SNAP to organise a peacefull demo on the treatment of fellow dayaks by the polis and gangster.