TYT’s NCR land is not spared

It is not only the Dayaks’ NCR lands that have been leased to companies, but native customary right land belonging to our present beloved Governor (TYT) has also been leased to a company for prawn farming, said Baru Bian (pic below), a prominent NCR land lawyer.

“I wish to state that even a NCR land belonging to our present beloved Governor was affected by the issuance of a Provisional Lease to a company for prawn farming, as revealed in one of the cases I handled, a decision, which is still pending in the High Court at Kuching, Sarawak,” he said in a statement.

“Such is the unbridled power of the present State BN Government of which these Dayak leaders are proudly part of. If the top civil servant’s NCR land can be affected, none of the ordinary Sarawakians NCR lands is protected and safe from such an abuse of power today. 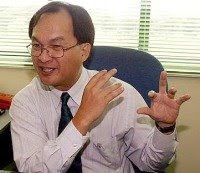 Picture Credit: http://www.malaysianmirror.com
“How I hope that these Dayak leaders spent more of their political energies addressing pertinent issue like the deprivation and encroachment of NCR over land rather than a political rhetoric,” he said when commenting on remarks made by PAS president Abdul Hadi Awang.

Hadi was reported to have said that the voters of Batang Ai did not know how to vote as they were still wearing loin clothes.

Bian who is a PKR leader in Sarawak said: “Some Dayak leaders who appear to have been angered and offended by such disparaging remarks should equally, if not be more moved with fervour and zeal in defending a more fundamental issue or rights affecting our Dayak community today, that is, the deprivation and encroachment of Dayak NCR lands and forests all over Sarawak by various companies.”

“This is more pertinent and crucial issue as the deprivation and encroachment of NCR lands threatens the very life and our existence as Dayaks and other natives of Sarawak, as land and the forests are the very source of their livelihood.

“To this day, none of the present Dayak leaders in the State BN Government dares to speak out on this very issue. Instead they have been found to echo the voices of their political master, Chief Minister Abdul Taib Mahmud that the State Government does not grab or take any NCR lands belonging to the natives of Sarawak.

“I respectfully ask these so-called Dayak leaders to go to the ground and see for themselves how hectares and hectares of NCR lands had been given out to big investors and companies for oil palm plantations, tree plantations, timber licences, quarry licences and replanting licences from Lundu to Lawas,” he said.- The Broken Shield

Source: www.thebrokenshield.blogspot.com
Posted by Jetty at 1:45 AM

if really tyt's ncr land have been taken for prawn cultivation, then i bet tyt if not consulted , can file a law suit. i think he must have some agreement with the prawn owner.

the dayaks have been shouting their balls off about the gov't taking their ncr land but when comes election time they take the money and forgot all about their ncr land.

so many are wondering how many dayak are affected by this seizure of their ncr land.if it's a minority, then the gov't won't be too concern about their cries. the gov't knows too well that court cases take a long time to finished and by the time cases are settled, it will be only the bones that are left of those corrupted people.

if the dayak are indeed concern about their ncr land they should throw out this very gov't that they voted in . Anwar have spoken and promised all ncr land that are stolen will be return to them if PR is in power. so now it's up to the dayak to decide if they want to have their ncr land back. the ball is in the dayak hands now.

those dumb dayak leaders who show the least concern must take the blame. they should be the one who must champion this issue and negotiate for win win situation. but not a whisper from these corrupted dayak leaders becos they are the very one who conspire with the devil and steal these ncr land. so that's is why they never show any interest in helping the dayak when the cries for help are ignored.

ask that sayor masing if he ever help any dayak regarding the return of ncr land. infact he join hands with those chinese towkays and foreign investors to steal the ncr land by saying that the dayak will benefit with this join venture.

it's is high time the dayak wake up and take the bull by it's horn. rid this corrupted gov't and vote PR.

in GOD we trust.