Dr. Rudy Tawie has graduated with PhD in engineering 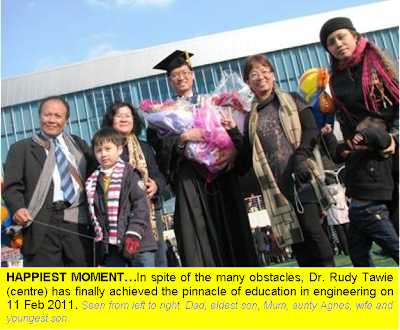 DAEJEON, SOUTH KOREA, (11 Feb 2011): How would you feel when you heard the name of an Iban youth being called to come to the stage to receive his PhD in Engineering, more so, if he is the second Malaysian to receive a PhD from KAIST. He was among the 507 Korean and graduates from other nationalities to receive their scrolls.

As a parent, who witnessed the convocation ceremony today (11 Feb 2011), I was overtaken by emotions to watch my third son walking tall among the Koreans and others to receive his scrolls. (Poh Kit Chong was the first Malaysian to have received PhD from KAIST. He graduated in August last year, but received his scrolls at the same time).

Currently, there are five Malaysian PhD students and other taking masters’ at KAIST.

Formerly known as Korea Advanced Institute of Science and Technology, KAIST which is located in Daedeok Science town, Daejeon, South Korea was established by the Korean Government in 1971 as the nation’s first research oriented science and engineering institution.

When KAIST was established in 1971, it recruited some of the best brains in the world. The current KAIST President Nam Pyo Suh was a former professor at MIT, USA.

It has so far produced 8,458 PhD graduates in science and engineering.

Rudy, 35, a lecturer with UiTM Kota Samarahan Campus, was first enrolled as a PhD student four years ago under the Ministry of Higher Education scholarship. 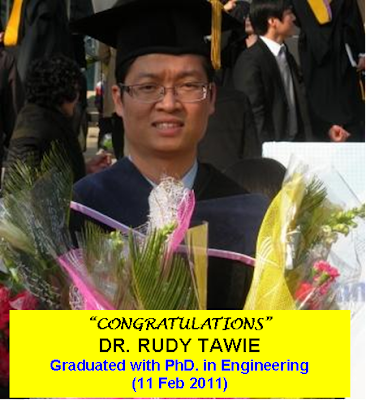 Not many students dare to go to KAIST, because of its tough and strenuous courses. He was required to publish his research works in international refereed journal. Rudy took up the challenge and graduated with flying colours. He scored 89.44 over 100.

He obtained his Diploma in Civil Engineering and Bachelor of Civil Engineering in UiTM on grants provided by the Dayak Trust Fund. He applied for Sarawak Foundation Scholarship and was turned down. No reason was given. (And you know who sits as one of the Directors).

Due to his potential (every semester, he obtained Dean’s list), he was adopted by UiTM for the Young Tutors Scheme.

This is why as a parent I am very proud to see Rudy, in spite of the many obstacles, achieved the pinnacle of education in engineering.

I am also equally happy to see that my three other children got through with their tertiaty education – Edwin, who graduated with a Bachelor of Mass Communication, Victor, a Bachelor Degree in Accountancy and my fourth son, Mervin, a Bachelor Degree in Electrical Engineering. Now they are doing well in their working lives. 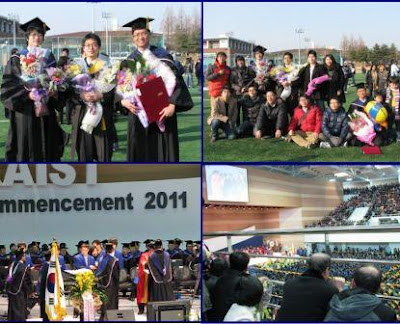 Our congratulation to Dr. Rudy Tawie. May he be a role model for all other dayaks students to emulate and for parents to see the importance of education. At the moment the number of illiterate dayaks beats all others!

JT, Heartiest Congratulations to your family on the graduation of Rudy with phD in Engineering.

Congratulations to Rudy and to very supportive parents. I hope his success will encourage more Iban students to value education and only through education the Dayaks can empower themselves, and, for many years they have been oppressed and left behind in socio-economic development.

Congratulation to Joe Tawie and of course to Rudy.Hope more Iban can emulate his footsteps.One touching part here is the role of Yayasan Sarawak.In 1990,i too applied for sarawak foundation scholarship,and one of the panel of interviewers which i never forget until today was EMPIANG JABU. I too didn't get it.TQ Empiang,you have performed excellently to help the community.

I do not know if a family is known pro opposition parties, whether the children can take the jobs in the civil service?

If the government do that, then it is biased.

To all fake Phd claimants.

Please stop the joke (of claiming the title Dr.)on yourselves. Our soceity knows that it is not real but sometimes out of respect just (reluctantly) address you as Dr.XXXX.

Thank you and congratulations Dr. Rudy for being a genuine achiever.

tahniah to dr rudy and also nuan uncle JT. its shows given the opportunity, we also can excel in any field. what saddens me is the refusal of Sarawak Foundation to grant him scholarship. I know scholarship is sort of free, but given their prejudice ngagai bala kitai (walaupun sama dayak Iban)i doubt they will want to give loan to him too. such rotten people among those in power trying to pull the plug from such (and many more) bright students. Congrats Dr and uncle JT.

Congratulation to Dr Rudy Tawie and to Mr and Mrs Joseph Tawie. Soon BN will dangle a carrot before you and make use of yet another Dayak to marginalise the community. Be true to your conviction and principle and God will guide and bless you graciously.

The success of your children in achieving their educational pinnacle reflects the quality of the upbringing they had from their parents.Congratulations to the whole family!

I share the joys in knowing the academic and professional achievements of all your sons especially Dr. Rudy Tawie.

Your and your wife's roles as "facilitators" to your children were examlary. Above all, it was them who'd struggled through the odds and the reached the marks.

It is my sincere hope (and some others as well I believed) that they will continue lead by examples not only by their academic par excellence.Also by their examplary performances in their own families'life and vocations.

My HEARTIEST CONGRATULATIONS to you, your family and especially to Dr. Rudy Tawie.

Always remember that:" ALL THE WAYS OF A MAN ARE CLEAN IN HIS OWN SIGHT, BUT THE LORD WEIGHS THE MOTIVES. COMMIT YOUR WORKS TO THE LORD, AND YOUR PLANS WILL BE ESTABLISHED." Prov.16:2&3.

God bless.
Andrew Baleau
Ps. I guess the weather is not so chelap S.K. Was in Seoul 3 years ago mid year.

Congratulation to Dr Rudy, his young family and to the proud parents. As a dayak, I am equally proud of Dr exceptionally achievement.
Let the success be an inspiration to the Dayaks.

You must be proud and as I am proud too of your son's success! Well done.

It does feel great when the system works even when so rarely.

The point is, imagine if governance is practised across all, there'll be no need for envy, fear, jealousy or hatred.

If you can be fair to all and feel committed in all respects, there never need to be doubt that if any person can be just and freely practise this of their own will, Malaysia will be stronger and better with justice and freedom

Congratulations to Dr Rudy and Parents.May the Lord bless you and family.

Nagypt had said Bumiputeras account for 73 per cent of the 2.4 million households in the lowest 40 per cent income bracket. If the corrupted BN government include the Bumiputras in Sarawak and Sabah ,when compiling the statistic, it would probably be closer to 85%. Who has been firmly and strongly in control of the government since 1963? How could it be that the NEP be abused to such a shameful extent that today 85% of the Bumiputras are in the lowest 40% income bracket?

The controversial and abused affirmative policies had only directly benefited Taib Mahmud, his family and cronies in Sarawak and Musa Aman and his gangs in Sabah. Taib believes he is the Pharaoh and party like SUPP has been pleading to the people especially the Chinese community to continue to recognise and support Taib as a Pharaoh by voting for SUPP’s useless candidates who are modified to be deaf, blind and dumb. All BN Lawmakers must abide by BN Government policy to be Deaf, Blind and Dumb to be on the wish list of Taib Mahmud.

To get rid of Taib the thief minister and Pharaoh and to prevent the emergence of future Pharaoh like Taib, Sarawakians must resolved to vote out and vote against BN Sarawak. Change Is in Our Hands and the Power to Change lies with us Rakyat. Make It happens. Just Do It !

Given the chance, all Dayaks' students can achieve the highest level of education! Most of our brilliant minds had been curtailed by the BN leadership through racial quota, Malays, being the majority, followed by the Chinese, Indians and others! Where are the Dayaks? Our state population is just 10% of the nations' population, Dayaks is just about a million, thus we will never be playing on a level field! In the context of Sarawak, the Dayaks comprised more than 50% of the Sarawak population. We should be given at least 50% of all the quota for Sarawak, be it in Education, Civil Service, promotions, etc... Dr. Rudy, Congratulations, your success should be emulated by all aspiring Dayaks students, despite all odds!

Hei! That's my one year senior in itm! Very proud of itm engineering faculty at that time (not during the UiTM time) Cool!! Anyway, congrate to Rudy and his family!

First congratulation to you Dr. Rudy Tawie.
Second, let us ponder what does this prove?
We are as good as anybody or even better!
Why should we play second fiddle to West Malaysia the racist government?
Come back and serve YOUR STATE and YOUR NATION! This place belongs to you!
You must start the ball rolling before all oil, gas, timber and all wealth are plundered and looted away!
Come back soon!

My heartiest congratulations to your son, you and the rest of your family!

Yup; I read about it in the newspaper...

Dr. Rudy Tawie was my lecturer in UiTM Samarahan. (2002 - 2003). Congratulations to him and family members.

Congratulation! All the best to Dr. Rudy Tawie! Sarawakians are actually more capable than West Malaysians, in many ways!

Congratulation- Apai Rudy, laban anak nuan udah bulih Phd. It is no easy task at all. Once again, congratulation and hopefully Rudy's Success will be fully emulated by other Dayak Iban youth in the future.

Arap ka bala anembiak kitai Dayak Iban ulih adopted the Culture of Excellent with a very low TLV (Threshold Limit Value)for failure and don't ever rely on Sarawak Foundation in every quest for a Scholarship.

Aku bc 4 iku anak, serta 3 iku bisi Degree, one is a Doctor, then a Electronic and Electrical Engr and then another the License Aircraft Engineer. Siku aja sida iya bc JPA Scholarship and the two boys are at their own initiative, because they really excel in the SPM with Top Grade. They scan the newspaper and all Top Nation Corporation who are handing out education fund which are not tied to any condition, provided they are having a good SPM Grade and that's it.

Normally they are taking between RM$15 ~25K per year which is more sufficient for the boys to survive and with a few ringgit from my side as well.

Congratulations Joe. You deserve the success of your boys. Hope to campaign with you in Sarawak.