46 longhouses in Simunjan to develop their NCR land? 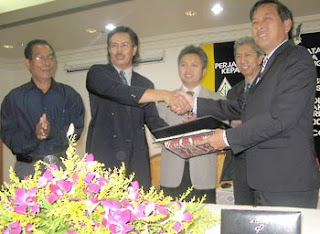 DD Plantations, a Kuching-based company, will provide the expertise and an investment of RM140 million to develop 9,629.6 ha of Native Customary Rights (NCR) land into an oil palm plantation, according to The Borneo Post (30 April 09).

The landowners get to enjoy 30 percent of the profits while DD Plantations get 60 percent and Pelita Holdings 10 percent.

Forty-six longhouse chiefs attended the signing ceremony of the joint venture at a hotel here, which was witnessed by Balai Ringin assemblyman Snowdan Lawan.

As the people’s representative of the area, Snowdan, who is Parti Rakyat Sarawak (PRS) vice president, said that it was his responsibility to ensure that his constituents enjoy better income and social benefits. He assured the landowners that the developers would not take away their land in the course of developing it.

Upon learning of the so-called signing of the joint venture, the people from the 46 longhouses were so angry with their Tuai Rumah that they demanded their resignation for “selling their rights to the company.”

But many Tuai Rumah claimed that they were tricked into attending the ceremony as they were told to attend a seminar in Kuching.

Yesterday (Sat, 2 May), there was an urgent meeting in Simunjan between Pelita Holdings and Temenggong Anthony, TR Sebli, TR Najib, TR Kudi, and TR Entali after they heard strong objections from the people to develop their land by Pelita Holdings and DD Plantations.

Meanwhile, those who oppose Pelita Holdings and DD Plantations will be coming to Kuching soon to consult their lawyers with a view to apply for a court injunction.
The other strange thing is that Snowdan claims that the areas to be developed are within his constituency of Balai Ringin.

For people like me who come from the area and a voter do not know that Semalatong, Sibau Rumbau, Isu and Kepayang are under Balai Ringin; these kampongs are under Simunjan constituency of Naroden Majais.

Naroden is not only a good friend of Yee Ming Seng, but his business partner. They own the Gedong Plantations and few more. Yee Ming Seng is a rich businessman from Sebauh, Bintulu.

Now the questions are: Why did Snowdan claim that these longhouses are under his constituency knowing very well that they are under Naroden Majais? Is he acting on behalf of Naroden? Or is Naroden scared of his own voters for taking away their land?

Now Naroden, known as the “Simunjan King of Oil Palm”, has been given 16,486 ha (roughly 41,215 acres) of land from Gedong to Sedilau, Simunjan and to Ulu Simunjan. The bulk of this land is under NCR and owned by Malays and Ibans. - The Broken Shield

as far as we concern, snowdan didn't claim all under his area. we were there at the ceremony listening to his speech. only some are from his area. better get your facts right. we taped his speech and this was what snowdan were saying exactly that day... "Sebagai Wakil Rakyat Kawasan DUN Balai Ringin mewakili kerajaan barisan nasional, adalah satu daripada tanggungjawab kami untuk melihat kawasan serta masyarakat dapat menikmati pembangunan sosial economi yang boleh membawa kemakmuran dan kesejahteraan kepada rakyat dan negeri sarawak secara keseluruhan nya."...Snowdan didn't even said and claim all under his area at all.

If YB Snowdan is truly a responsible "wakil rakyat yang ingin melihat kawasan dan rakyatnya menikmati pembangunan sosio-ekonomi" as claimed, he should take the initiative to discuss the matter with the companies and SALCRA so that the the rakyat can really benefit from this project.

What puzzles me was why the villagers were not consulted in the first place by the Tuais Rumah to develop their NCR land?

Can we know the details of the MoU agreement between the companies and the land owners?

Ah-kai! 50 cents a month return being profits paid last week by Jabu and this week they opt for 21 cents. Either they are stupid or just had too much "ngirup"!
Maybe YB. Snowden would like to give them an assurance on when they get to see their first windfall profit. Most likely many many years from now if they are lucky and are still alive? By then 21 cents will get you one banana a month. Even a monkey can't survive on one banana a month.
They will get better returns if they start planting durians on their NCR land now rather than oil palms.

well..90 percents land owners agreed on this project with LCDA. and only 10 percents want to be with salcra but salcra were to slow and the people cant wait cos time is ticking and dont want to wait and waste anymore time sebelum kena tinggal bas. furthermore salcra want to develop other area that is telagus block and not this kepayang semalatong block. snowdan so far doin a good job as a YB and u know is not an easy job to be one. not all YB are the same. same as you also. if your brother is criminal, people cannot say that you a criminal also. snowdan help a lot of people there in his area and help a lot of the gereja also and as well in term of development also. he always try his best to speed up the development in his area to his maximum capacity. he is not like any other YB that just talk only. he is a new kind of breed of YB and not the old type anymore. i know he work very very hard on his area. he doesnt disturd people or you. so i hope you respect him as he respect you also. he his well love, respect and support by the people there.

Those tuai rumahs have their 'aum juak' with those companies for their personal gain. Who knows how much they get in their pocket. The real victim is their own people who knows nothing about the agreement or maybe no prior discussion with them.

Say, damages has been done...!

Before any project in NCR land could be implemented, discussion and consultation with the people is very important not with those tuai rumah only.

Those tuai rumahs are easily being asked to agree provided that their mouth are shut with small amount of token, dinner at 5 star hotel and happy hours.

If snowdan is truly his poeple representative,then he should call all the dayaks who are affected by this projects to come out and show their hands.If they agree then thumb print and this will be evidence of their willingness to participate in this projects.Everytime there is a project in the dayak areas on NCR land,there are bound to be quarrel and those who don't reap any benefit will do anything to sabotage it.But sometimes its the MP or YB who team up with outsiders and Tuai Rumah to steal the NCR land.They have been cheated too many times so I can't blame these dayaks for not trusting their MP or YB or even their own Tuai Rumahs.

My facts are based on reports of The Borneo Post. If the reports are not correct then you should tell The Borne Post to correct it.

the longhouse squaters should be very happi with 21 sens enough to buy.?? ...(the company make millions & live a luxury life)

Nowadays, in our beloved Sarawak, it's really difficult to TRUST our leaders. All of them are for themselves. There are almost NO leaders who really care for the people. This is very sad indeed.

We trust them with our FUTURE but they rob, cheat and manipulate our people.

I hope and pray that one day, these BN leaders will PAY for what they have done to our naive and poor community. And hopefully, our children will not suffer because of these GREEDY POLITICIANS.

Who is that bloody Anonymous that keep on praising Snowdon.He is Snowdon's cronies or just himself barking all the shit about how good this office boy is
I tell you,Snowdon is just nothing but another of BN lair who is waiting for the right time to steal.Boy,what can a inexperience boy do to help the dayaks.He is just showing off his riches becos the Lawans are damn rich from the APs they got and the cars business they are in.
Ask him to donate his own money and help the dayaks if he is that good as said.I have no faith in him and I can honestly say he will be out in the next election.

When I read the names of those Tuai Rumahs as mentioned, I am more upset than angry.
Anyone in Semalatong, Sibau Rumbau, Isu and Munggu Lallang will tell you that these Tuai Rumahs are known conmen and thieves. Take the case of Tuai Rumah Nigol. Reports have been made against him for theft, but sad to say, nothing has been done to bring him to justice.
Tuai Rumah Sebli from Sibau Rumbau is also a man with dubious character. Ask any of his anakbiaks, they will tell you so.
Tuai Rumah Kudi is a first cousin of Tuai Rumah Nigol and so they are birds of the same feathers.
Sad to say, the honest and trusted Tuai Rumahs in the Kepayang and Semalatong area are excluded for reasons best known to Naroden.Also, those Tuai Rumahs are die-hard PBB supporters who are prepared to betray their anakbiaks for financial gains.
I doubt if Snowdan knows anything about it, and if he does, he would not tell.

I have decided not to approve any more comments under this topic which seems to be "attacking" other readers/commenters using harsh words.

As a gentle reminder, comments that are using derogatory (insulting) words, racialist in nature and too personal will be disallowed.

Thank you for your attention.