Sale of Python meat – where are wildlife enforcement officers?

In Sarawak, a python meat is not only considered as a delicacy, but one that it is believed to have some medicinal values particularly among the Chinese such as purifying our blood, arthritis, skin diseases, etc.

It is little wonder that pythons are a common sight especially in a town like Serian. I never missed seeing pythons that have been cut into pieces weighing a kilo or more every time I visit Serian.

During my “balik kampong” for the Gawai Dayak celebrations, I noticed at least two pythons – one weighing about 100kg that had been cut into pieces and another but smaller one. 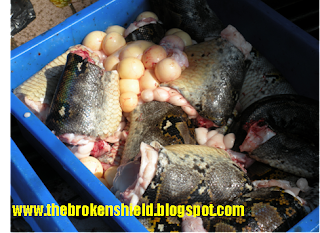 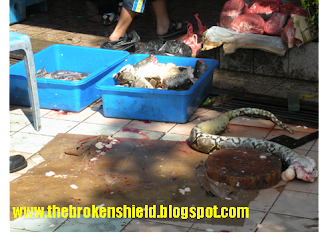 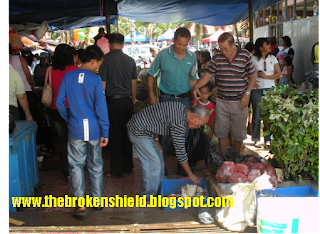 I saw a big crowd watching piles of python meat at the Serian Open market (see pictures above) and asked them where the slithery animals had come from. They told me that some Dayaks had sold them to the towkay at RM3.50 a kilo and the towkay in turn sold the meat to willing buyers at RM15.00 a kilo. So the towkay made a profit of RM11.50 a kilo.

They told me that this open sale has been going one for some time. But what baffles me is: where are the enforcement officers from the Wildlife Department? Don’t tell me they do not know about it.

Under the Sarawak Wildlife Protection Ordinance 1998, Section 29 (2) any person who hunts, kills, captures, sells, offers for sale, or claims to be offering for sale, imports, exports, or is in possession of, any protected animal, or any recognizable part of derivative thereof, or any nest thereof, except under and in accordance with the terms and conditions of a licence, shall be guilty of an offence. Penalty, imprisonment for one year and a fine ten thousand ringgit.

Could the big snake be the “Nabau” that was seen swimming in the Baleh river several months ago? Or could it be a python?

I tried to contact the Police in Belaga to confirm the story and to find out what has happened to the snake. Some how or rather my calls could not get through. Now look at the video. – The Broken Shield

the python shown looks either dead or too full to move and it is so much like one of those BN politicians who had too much 'makan'... to the brink of exploding .. with projects .. ! eahahaa

All spices of phythons are protedted animals listed in Part II of the First Schedule of the Wild Life Protection Ordinance, 1998 (Law of Sarawak).

Traditionally, no people purposely go in hunting for phythons. They found the reptile by coincidence in the immediate sorroundings or deep in the forest. Sometimes, the reptile attacked or killed domestic pets and the owner out of curiosity killed it. Instead of throwing its carcase into a river or dump it in the forest, it was quite logic to bring the reptile recognizable parts to the wet market for sale, although he (kampong/longhouse folk) was probably not aware of the existing law. How can we expect kampong/longhouse folk know the law.

But, under Section 34 of the same Ordinance, any person who buys any wild animal or any recognizable part or derivative thereof which is sold or offered for sale is committing an offence punishable with a fine of two thousand ringgit.

Did you buy a kilo of it, Jetty?

Sadly this sort of thing will continue until the fine is so high and the threat of jail is realized that people stop.

there is no way that one or two enforcement officers can control this situation. needs a massive influx of money from the government, plus the customs people too.

The python too full. Makan "orang". The moral of the video is simple and plain logic. An excellent example of the Bull & Nonsense. What Bull & Nonsense? BN lah idiot...