KUCHING: About 65 native landowners from Balai Ringin today staged a protest in front of the land and survey headquarters, Petrajaya, Across River, Kuching, after the Director of Lands and Surveys failed to  return to them their native customary rights (NCR) lands that were seized   right under their nose.

The natives first brought their case to the Director of lands and surveys in January this year asking him to cancel the provisional leases on their land.

On March 17, the same group again tried to meet the director. Again the director refused to talk to them. Instead he sent a junior officer to deal with them. 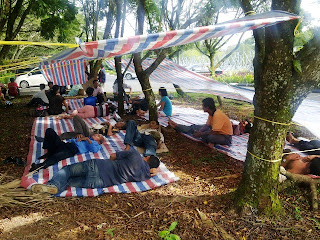 This morning was the third time they wanted to see the director. Again the director refused to meet them.  A junior officer was sent to talk to them saying that their problems are yet to be solved.

Unhappy and angry the natives comprising men and women refused to go home and made their camps in front of the land and survey headquarters.

One of the leaders, Augustine Bagat said that they would not stop protesting in front of the headquarters as long as their problems are not settled.

“While one group of 30 people goes home, another group of 30 comes in to replace them. We will eat and sleep in the camps.

“We will do it (the protest) for the next few days,” he said.

According to Augustine, three companies – Memajujaya, United Team Trade and Tetangga Arkab – were given the PLs to plant oil palm in their NCR land.

One of the companies is allegedly owned by the former Kedup assemblyman, Frederick Bayoi Manggie.

His company is said to have been awarded 5,500 acres of land, the bulk of it is NCR land.

“Or lands have been bulldozed and fruit trees, rubber gardens and farms destroyed,” said Augustine, adding that the government had refused to talk with them.

The Kota Sentosa Assemblyman Chong Chieng Jen who met with the protesters said that he would raise the matter in the current sitting of the Dewan Undangan Negeri.

“The delaying tactics by the land and survey is not helping the natives. This is the time when the people are standing up for their rights that the government has taken away their land. They are going to say here until the problem is resolved.

“We   call on all those who face similar problems to come and visit them in order to show solidarity with them,” said Chong. 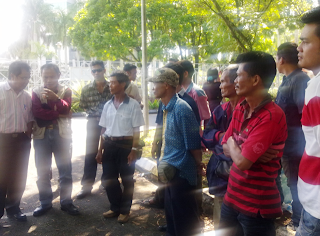 He said that this is not the only group that has suffered. Throughout Sarawak there are hundreds of thousands of natives whose lands have been taken away from them.

He said: “This is very unfair on the part of the state government which just keeps and only turns a blind eye to their problem.

“Actually the government is working in cohorts to take away NCR lands from the natives,’ he said, pointing out that the problems are created by the system.

“Only through change of policy that these problems could be solved,” he added.
Posted by Jetty at 10:53 PM

It is not a bad idea if the dayak Iban landowners from Balai Ringin wishes to have party in front of a government office.Can stay there but do not flout the law (government as well as council).

Maybe the government should take this opportunity to brief them on the good intention of it's (the government) land policy and make them realise the benefit therefrom.

Our Hogansiau YAB Tan Sri Datuk Patinggi Alfred have been working hard on this land development policy for their (Iban) benefits but some are still not convinced.

I am advising the Iban protestors not to demonstrate or camp-in in front of our Chief Hogansiau and his assistants' houses. It reflects very badly on our Iban culture should it happen.

"some are still not convinced" you are right, bro. In fact there is actually nothing that can be the basis for being "convinced" that this Jabu will ever do anything good for the Ibans. No way, it is in the design of things set up by puppet master in BN higher up.First thing, bro, are you convinced? or are u of those in league with government largese through Jabu and therefore you are happy and "convinced" Jabu is doing, has been doing and will doing more for your types?