‘Shut up… you lawyer buruk’ 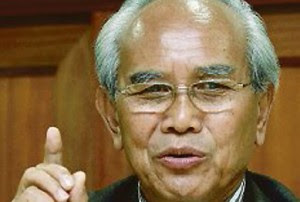 For 10 minutes, the August House was a virtual ‘fish market’ as Jabu went on a verbal rampage attacking the opposition, accusing them of suppressing and oppressing natives.

The sudden outburst, which shocked the assembly, came about when Wong stood up to object to Jabu’s accusation of DAP, whilst answering a supplementary question from Joseph Mauh (Tamin), on what programmes the government had to help the poor and the needy apart from the ‘E-Kasih’.

Towards the end of his explanation Jabu said: “I would like to remind especially DAP who have been suppressing and oppressing the opportunities of poverty eradication. You throw away your selfish ideas …”

The heated exchange went on for at least 10 minutes with Speaker Asfia Awang Nassar having a hard time trying to bring the house into order.

Jabu ignoring Asfia’s order went on to say: “Let it be recorded here. Every time I say, “DAP suppressed and oppressed the opportunity of NCR land owners from participating in poverty eradication program,” DAP walked out because the truth hurts …”

His attack on Hua Seh came about because the latter had asked that pesticides and insecticides be labeled in Bahasa Malaysia, English and Chinese.
To which Jabu vented: “Tuan Speaker, poverty eradication is priority and I would like to repeat (that) I am the Minister of Rural Development, I am coming from one of the Dayak communities and I know that the Dayak communities are still at the disadvantaged, living in rural areas….”

All this while, the house only heard what Jabu said and the replies from the opposition were not heard as their microphones were switched off.

The drama only stopped when the speaker threatened to adjourn the meeting and told Jabu to wind up his answer.

Jabu was answering a supplementary question posed by Mauh on what programmes the government had to help the poor and the needy apart from the ‘E-Kasih’.

He said the government was also focused one ensuring that the head of the families prioritized education.

Touching on the Penan community, he said villagers participating in the RPT programme in Long Bruan and Ulu Baram would greatly benefit.

“I promise you by the year 2016, the Penans who participated in this programme in Long Bruan and Ulu Baram will enjoy benefits.
Posted by Jetty at 12:50 AM

Tan Sri Jabu is the Minister In-charge of Penan Affairs.

May I ask him a question. Have all 16,281 Penans got their Mycards? Jabu had told the world that the government set the target of 2011 to issue identify documents to all our people in Sarawak especially 16,281 Penans.

If that has not been done, then he was merely singing it to the people - 'good at singing but no substance in lyrics".

Being a person of good character, to utter such ward as Lawyer buruk is not in YAB Hogansiau Tan Sri Datuk Patinggi Jabu's vocabulary. Maybe is a kind of misquotation

Although all his children are married to non dayak and his next generations are almost non dayak, it does not mean that YAB Hogansiau Tan Sri Datuk Patinggi Jabu shall care less of his Dayak Iban subjects.

To substantiate the above, YAB Hogansiau Tan Sri Datuk Patinggi Jabu announced that the (RPT) programme shall benefit the poor to a tune of RM2,500 per family per month.

With YAB Hogansiau Tan Sri Datuk Patinggi Jabu's appointment in looking after the affairs of the Penan race, it is announced that even the penan shall enjoy the RM2,500 per month benefits from the (RPT) programme.

WHAT ELSE CAN YOU ASK FOR FROM OUR BELOVED YAB HOGANSIAU TAN SRI DATUK PATINGGI JABU???

has been a deputy cm for few decades already, is that the achievement he has done for his people, a mountain of promises? remember he has been a minister of agriculture for decades, how many dayaks farmers has he produced earning more than RM2500.00. iam not agains him, but to remind him to check his facts first. how many iban farmers in Betong earning more than RM2500.00. All i know was a person ENGGU who proclaimed himself as such as reported once in a local newspaper.

all that can be added is that Jabu has been doing all sorts of "ssist-the-native-programme" from start of his carrier as DCM, many2 years ago. His kepayang, fishfries to rivers, young cicks to farmers, BN fertilser bags, 2 per family, near elections time, and his shouting of his mouth blaming others in DEN meet and other functions. His is a true case of "being loyal" to pehin Sri. That what matters, nothing else. Jabu will remain Jabu and nothing real good will come out of him. That is the master plan: that Jabu will not do anything concrete, first bcos he is incapable of and 2, he is told not to be capable in delivering to the rural Dayak areas otherwise the Dayaks will be too comfortable and will not vote in BN next election. Oh yes, keep the Dayak poor and they will be easy to control. Once elections are around promise them attap zinc and anak ayam 20 piece a piece. That is rural poverty eradication program ala Jabu vi-za-viz pehin sri Taib.

Yang di kasihi,yang dicintai ,yang dihormati,yang dirindui and yang dipeliri.What an idiotic outburst from a super senior minister and deputy CM.What?The Dayaks will receive a minimum of rm.2500 per family in next few years.? SALCRA has been around for countless years,how many SALCRa participants receive rm.2500 per month Jabu? So what land scheme is Jabu talking about? A scheme to rob the Dayaks more of their land sounds appropriate.If Wong is loyar buruk then Jabu is Menteri Beruk.Claimed to champion the Dayak cause but supported the initial proposal to delete the word Dayak.Claimed to be the leader of the Ibans but become the main accomplice to lie and cheat the Ibans.Hey Jabu,tell us how many families in Betong receiving rm.2500 from your land development program?

Nice statement.By the year 2020 each Dayak family will receive a minimum of rm.2500.Just eight more years to go. These words are uttered not from Jabu's heart neither based on proven studies,but words spoken out of the 'paranoid brain' located in another head under Jabu's waist.True.Even though SALCRA has been around for so many years,on average,each Salcra participant gets a peanut of 60 cents per day.So what other land scheme is he talking about? Enda abis abis bula sereta ngemeli ke bansa diri.