KUCHING: The Kuching High Court is again made another land mark decision when it rules out on 20 February 2011 that any joint venture agreement between a non-native and native in oil palm plantation is in contravention of Section 8 of the Land Code. 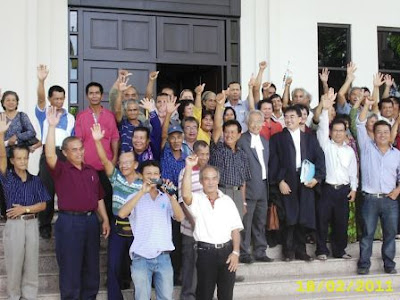 The decision of the court has wide implications on joint venture agreement between non-natives and natives in the oil palm plantations.

There are more than 20 JV companies with natives may be affected by this ruling.

The Pantu natives have sued LCDA, Pelita Holdings Sdn Bhd, Tetangga Arkab and the state government of Sarawak as first, second, third, and fourth defendants respectively on behalf of themselves and 90 others.

The plaintiffs who are ethnic Ibans, natives of Sarawak, claim to be entitled to native customary rights over land in an area described as ‘the disputed are land’ in the Pantu Land district.

High Court Judge Linton Albert who delivered the judgment said that their joint venture agreement was in contravention of Section 8 of the Land Code because neither Tetangga Arkab Sdn nor TETANGGA was subsequently declared a native because it is a principle of antiquity that things invalid from the beginning cannot be valid by a subsequent act.

He said: “Section 8 (a) of the Land Code provides that ‘a person who is not a native of Sarawak may not acquire any rights or privileges whatever over native customary right.

“The parasitic role of Pelita Holding Sdn Bhd, which had nothing to begin with has relegated the landowners into absolute obscurity under the Principal Deed and as the landowners are total strangers to the joint venture agreement, the defendants cannot be heard to say that Tetangga Arkab and TETAGGA had nor acquired rights and privileges in the native customary rights land that they have undertaken to develop into an oil palm plantation.

“How else defendant witnesses whose sole interest was to do business, be attracted unless TASB and TETANGGA had rights and privileges over native customary rights land which the latter would in turn into an oil palm plantation under the joint venture agreement,” he said.

Earlier the judge said that irrespective of the cleverly devised legal mechanism and legalistic language which constituted the Principal Deed and the joint venture agreement, they are mere fig leaves too scanty to conceal their violations of Articles 5 and 13 of the Constitution because the sum total of the rights of the landowners, to put it crudely, and for want of a better word, is zero.

The natives, he said, have been deprived of their native customary rights land which is a source of their livelihood and lost the rights to their property which are violations of Articles 5 and 13 of the constitution.

“This is patently demonstrated by following aspects of the Principal Deed which is briefly set out for emphasis and at the risk of repetition. They are these. Firstly Pelita Holding Sdn Bhd was to receive and collect the benefits of the development of the native customary rights land into an oil palm plantation, not the owners;

“Thirdly, the native customary rights lands are immediately amalgamated and title is to be issued in the name of the joint venture company and the landowners would have no beneficial, legal, equitable or caveable interest in the land to be issued with title,” he said.

Albert said: “And one can go on and on to illustrate how the terms of the Principal Deed have stripped the landowners of their rights in every conceivable way and reduced those rights into nothingness.

“The joint venture agreement was also in contravention of Section 8 of the Land Code,” he added.

The judge said that the illegality was so patently clear as to afford no justification for disregarding it.

“A wrong no matter how artfully disguised as the Principal Deed and the joint venture agreement are, cannot overwhelm the fact that thyey are in violation of Articles 5 and 13 of the constitution and Section 8 (a) of the Land Code.

“It matters not that the landowners have been paid some dubious money of RM120.00 per hectare a miserly sum considering the fact that oil palm planted on their land had been harvested for more than three years. Or that the landowners, particularly the government certified Tuai Rumah, led the Penghulu continue to bury their heads in the sand and remain impervious to the truth, steadfastly clinging to their delusion that oil palm plantation would be manna from heaven even though many acres of their native customary rights land had been planted with rubber trees which they had gainfully tapped for latex before they were cleared without compensation to make way for the oil palm plantation,” he said.

The 4th defendant’s plea (State government) that the plaintiffs’ claims to native customary rights were not in accordance with Section 5 (2) of the Land Code or in accordance with any law applicable to the creation of such rights was a non-starter because it was the defendants’ case that the oil palm plantation was created over 7,000 hectares under the Sungai Tenggang NCR Development and the plan tiffs’ claims were confined to land within that area.

The Principal Deed of which the 4th defendant was a party also stated that to be so. The 4th defendant’s contention that all the natives in the area had consented to the development of the native customary rights land flies in the face of the incontrovertible evidence adduced by the plaintiffs to the effect that they had not agreed to the destruction of their native customary rights land by TETANGGA.

Finally apart from the fact that it was not pleaded, the 4th defendant’s reliance on the Land Code and Development Authority (SG. Tenggang NCR Development Area) Order 2006 issued under the LCDA Ordinance was ill-founded because the Principal Deed and the joint venture agreement had been established to be invalid from their inception and cannot, therefore, be validated by the subsequent act.

“This is but one example of the overzealousness of the state functionaries which led to the total disregard for the legal aspects of implementation of oil palm plantation.

“The various justifications relied on by the defendants for the initial implementation of the development of the NCR land have been demolished and the whole substratum upon which they depend for their continued role in the oil palm plantation does not exist by reason of illegality.

“There is no legal basis for LCDA, Pelita Holding and TETANGGA to remain on the native customary rights land which hs been acquired by the plaintiffs from which they must inevitably leave,” he said.

In the circumstances and for the reasons aforesaid the Court declared and ordered the plaintiffs are entitled to their claim to land under native customary rights in the Sg. Tenggang NCR Development area at Pantu.

It also declared the destruction of the plaintiffs’ respective native customary rights land by the first (LCDA) second (Pelita Holding Sdn Bhd) and third (Tetangga Arkab Pelita) defendants was unlawful and damages to be assessed by the Deputy Registrar to be paid by the first, second and third defendants with interest at 4% per annum from the date hereof until settlement.

It ordered that the first, second and third defendants forthwith give vacant possession of the plaintiffs’ native customary rights land.

Fourthly, the first, second and third defendants and their servants, agents, assignees and successors are restrained from entering, occupying, clearing, harvesting or in any way howsoever carrying out works in rhea plantiffs’ native customary rights land; and costs to the plantiffs to be paid by the first, second and third defendants to be taxed unless agreed.

The plaintiffs were represented by Dominique Ng and assisted by Datuk Seri Daniel Tajem.
Posted by Jetty at 1:59 AM

Congrats and well done. High Court Judge Linton Albert
has the balls to do the right thing compared to those judges across the water. Those cinamen who do business with PEK MOI on these illegal plantations are now shitting bricks, 100s of millions will go down the drain. Serve them right for being greedy and not honest. The wind of change have come and Jabu, Masing, Manyin etc are in deep shit. They betray their brothers and family and their ancestors. Rentap is smoling now.

My take -
1. The lawyers who drafted, prepare and finalise the execution of this Agreement must be negligent, unprofessional in their conduct, and reported to the Advocates Association for disciplinary action.
2. The Agreement is just a veil to hide their illegal acts. The Land Code spells it out clearly. Yet these parties proceeded blatantly.
3. Look to the heads behind this scheme. Does it get the approval of the State Planning Authority? Does it not get the approval from the CM? Is the Director of Lands & Survey not aware of this arrangement? They are all equally culpable for participating and promoting illegal and unlawful acts.
4. The learned Judge was bold and daring with his judgment. But if the Judiciary is meant to be independant, he has nothing to fear from the repercussion of his rulings. Syabas to this Judge to decide on the laws, and not what the political CM and his cronies want him to do otherwise.
5. At least, justice is still avaialble in Sarawak through the Courts. In West Malaysia, it's nothing else but UMNO laws and UMNO's justice.
6. It's high time the Dayaks, Iban, Penans and all the indigenous natives of Sabah & Sarawak stand up and fight for their rights. In West Malaysia, just look at the Indians and how they are treated by the ruling Barisan Government for the past 50+ years.

In the west, many esp cina treated likewise as well by no law nmmno. Sabah is done so Ibans and orang Ulu please wake up.

It's another landmark decision on NCR status,no doubt.Justice Ian Chin from Sabah a few years back had came out with the first landmark case on NCR,if i was not wrong,in Nor Nyawai's case.These judges are implementing justice in accordance with the laws of the country,so the question of race,repercussion,by-partisan do not exist and should not be presumed to exist even.As for Jabu,Mawan,Masing or Manyin,once again i said,what do you expect from them!.In brief,they themselves are accomplices to these acts,so the question of whether or not they will speak out for the Dayaks is a non-issue.

Some whisper might be heard along the corridor of power: here is an Iban Judge, an Iban advocate sitting over Iban land claims and decided positively, what does it mean? To the non BN supporter the decision should not be looked at from the racial, any of it, angle. It is a decision based on law. What is wrong at its inception cannot be right by any subsequent steps taken - it is a beautiful decision indeed. Congrats. to all involved. This will have a far reaching implications to all LCDA initiated land development projects.

If CM really mark his words (Borneo Post) 1st. March)the State Government wont appeal, let wait and see. From legal point of view given by Yang Arif Datuk Linton, is was very clearly stated why the dewcisions was in favour of the natives.

If I am not mistaken when the original concept of NCR land development was mooted Mr. Leonard Martin Uning and Sylvester Entri Anak Muran was actively involved in the development of its mechanism. Can we have comments from the now.