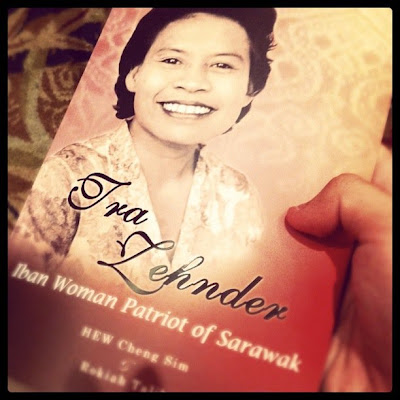 KUCHING: Sarawak mourns for the loss of two of the most distinguished personalities – the death of James Wong on Monday, July 18, who was one of the founding fathers of Sarawak’s independence within the federation of Malaysia, and the other is Sarawak’s first appointed Council Negeri (State legislative assembly) member Tra Zehnder.

Tra passed away on Friday night, the day when Wong was buried in Limbang. A few hundred people attended her funeral service on Monday July 25.

Both Wong and Tra, who had contributed immensely to Sarawak’s social and political development, had created history one way or the other and had set up exemplary roles for young Sarawakians.

For Tra, she was best known for her fight not only against injustice and unfairness meted out against the Dayaks by the colonial government, but her crusade against the exploitation and degradation of Iban women depicted on postcards as bare-breasted beauties which were also used as tourism ‘materials’.

Born as Philomena Tra on October 25, 1926 to Inting Jemat and Sara Unang, both Ibans from Simanggang, she married a Burmese Eurasian who was a colonial government officer. Through her marriage, she was placed among those in high society, an opportunity not many women, less of all Dayak women were able to enjoy.

Tra’s leadership quality was first spotted in 1957 by Mr. Jakeway, chief Secretary to the Sarawak Colonial Government when she was actively involved in Serakup Indu Dayak Sarawak (SIDS) which she used as a vehicle to fight against injustice and oppression against particularly the Dayaks.

She was the secretary of the association and later became one of its longest serving presidents whose tirade was against the exploitation and manipulation of Iban women posed bare-breasted as tourism materials and pictured in post cards for overseas “consumption”.

After repeatedly calling for such cards to be banned, the government finally gave in to her demands when pictures of bare-breasted women were removed from the walls and postcards containing the same were banned.

Known among the official circles as a fighter, it was not surprising that Tra was appointed to be the first woman as a member of the council Negeri. In the council which was dominated by men, she managed to make her presence felt through her oratorical skills and her eloquence in English which was the only language used in the Council.

One of her first demands was to call on the Colonial Government to recognise the existence of the Dayaks, their contribution to Sarawak’s economy, racial harmony and stability by declaring one day in a year as Gawai Dayak preferably to be on June 1 every year.

Although her request was rejected, she had, however, paved the way for Stephen Kalong Ningkan’s government to approve it.

“All these years, I have been giving and continue to give free and voluntary service. I have never thought of any reward to do my bit for the Dayak community. What I want is to see that the Dayak people especially the women to go side by side with the others. This is what I try to do”, she said to a reporter after the Council sitting.

Following Ningkan’s dismissal as chief minister of Sarawak in 1966, Tra was inspired by him into politics and was naturally chosen to lead the women division of Sarawak National Party until she resigned together with other leaders to form Parti Bansa Dayak Sarawak (PBDS) in June 1983.

Like in SNAP, Tra used PBDS as a platform to travel state-wide in trying to instil political awareness among the Dayaks and self-respect among the womenfolk. As a result of her tireless efforts, thousands of Dayaks joined PBDS making it the second largest political parties after Parti Pesaka Bumiputera Bersatu (PBB). By 1990 PBDS was reported to have nearly 200,000 members.

Partly due to her age, Tra resigned from PBDS after helming the women division in 1988. Also leaving PBDS together with her were Vida Bayang, YB Gramong Juna and YB Mikai Mandau. Juna and Mikai joined PBB and brought with them their seats.

Tra was rewarded with the 'Temenggongship' for the Iban community in Kuching Division from July 1988 to March 1996. Upon the expiry of her term as Temenggong, she was appointed as the president of the Sarawak Natives Council of Adat which was tasked to codify all the natives Adat, culture and heritage. She held the post for six years.

For all her contributions she was honoured with Datukship and became the first recipient of Laila Taib award.

I would like to express my condolences to Tra's family and relatives. She will always be remembered and her legacy will live on forever, and in particular her inspiration and role model to Dayak women.

I would like to obtain a book about her written by Hew Chengd Sim. Can the book be ordered online?

My highest respect for Datuk Tra,for her political wisdom,courage and contribution.

Did anyone notice that there wasn't any tribute from Taib on James Wong at all? After all, if not for people like James Wong, Taib would probably a poor lawyer today instead of a billionaire. His lack of decorum and grace is very telling.

Probably he was on sick leave and could not attend the funeral.