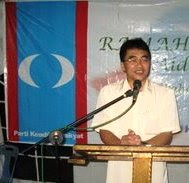 Edil Rahmat, head of PKR youth movement in the State and a famous blogger, Lina Soo were also arrested for taking part in an illegal assembly at the Kuching Water Front when they lighted candles for vigil for democracy in Perak.

All of them were wearing “black” T- shirts.

Earlier at around 7.30 pm Police have closed all roads leading to the Kuching Water Front to stop PKR members from holding the peaceful candlelight vigil to support their colleagues in Perak.

But Ng in “smses” to all his friends warned them that they should be prepared to walk to the Kuching Water Front.

Said Ng, who is also the chairman of the PKR division in Kuching, said: “I have never seen so many Police personnel doing their duties to arrest the most dangerous ‘terrorists’.

At the time of writing, they were still at the Kuching Central Police station.
Posted by Jetty at 12:21 AM

Although I'm totally furious of the police's actions, but YB Dominique should apply for permit (most likely the permit won't be issued)when organizing assembly or rallies.

And lately, it seems that the government is using police to retain their rules to curb a so called " national threats" e.g. the arrest of PKR's YBs in Perak yesterday. Now, where is DEMOCRACY that we uphold all these while ???

Anyway, for the sake of peace and stability in our country, I recommend peaceful resolution. If we want to change the present incompetence and corrupt government, "VOTE THEM OUT".

So it looks like Sarawak has also descended into a police state. Do we still want the BN to rule?

As I can see it, it was just a peaceful `candle light vigil carried out by YB Dominique Ng and 9 others, but we do not know what was actually transpired on the ground leading to their arrest by the police.

I quess, no procession or musical instruments played which required a police permit under Section 27 of the Police Act.

Kuching OCPD said they were investigating the case and would get views from a Senior Federal Counsel.

yb dominic...we the young voters are behind you and pakatan rakyat.