When will we ever learn? 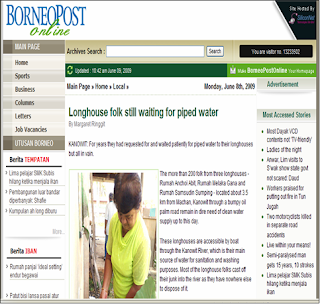 These longhouses are accessible by boat through the Kanowit River which is their main source of water for sanitation and washing purposes. Most of the longhouse folks cast off their junk into the river as they have nowhere else to dispose them.

“We have been waiting for so long for the government to bring clean water supply to our longhouses,” said Ringgit Injing to the paper.

Sometimes, he said, they would go to Machan with big buckets to ask their relatives for clean water.

The folks of Rumah Samsudin Sumping claimed that in 1996 officers from the Kuching Water Board went to take samples of the water in Sungai Kanowit to determine its quality.

Said Ringgit: “They said that within six months after taking the samples, clean water supply would be possible, but until today, after 13 years, we have yet to see it.”

He said that every time there were events or festive occasions like gawai, the folks would walk to the nearby river bank to get water for washing and to go to Machan to get their drinking water from shop house owners or relatives residing in the area.

According to a villager, Mad Injing, 68, they have been doing this for last 50 years. “We asked through our YBs to provide piped water to our longhouses, but somehow our request went unanswered. Our YBs had sent hundreds of letters requesting for clean piped water from the authorities with no response.”

“How many more Malaysia plans (MP) would we have to go through before piped water can be channeled to these longhouses?” the people asked.

Yes how many more elections the people of the three longhouses have to vote for the Barisan Nasional candidates/YBs?

Being BN strong supporters, you know that you have been cheated; you know that they have broken their promises? But why are you continuing to elect your YBs, and in directly, elect the State government?

When will you, the people of the three longhouses, ever learn?

Even the newly elected YB for Batang Ai Malcolm Mussen Lamoh has started to worry that the BN State government may not fulfill its by-election promises.
According to The Borneo Post page 6 dated 9 June, Mussen said: “As the newly-elected representative in the area, it is my fervent hope that all the projects promised during the election be implemented as quickly as possible as a gesture of saying thank you to the voters.”

He said the projects totaling more than RM70 million would definitely give a great impact to the people in the area.

Why Mussen is getting worried is because the state election is around the corner. It may be held any time between year-end to mid-2011. So if the BN fails to deliver its promises between now and 2011, it may affect his chances in the State election.

But will they also ever learn after being cheated election after election? – The Broken Shield

All I can say is you get the Government you deserve.

50 years on and still waiting for pipe Water! This very basic amenity and a necessity in life that a lot of us take for granted. The money spent on food to celebrate the BN victory in Batang Ai could have easily fixed that problem.
Take the YB of Kanowit to task! What are his priorities with regard to his commitment to his constituents? While he enjoys clean piped water his constituents have to find, beg and carry water from elsewhere. If he is so ineffective and incompetent bordering on useless in getting the government to provide pipe water then he should resign! The other option is to vote him out soonest otherwise it will be another 50 more years in the waiting. Irony is, impressive big DUN building in Kuching with plenty of tap- water to water and feed the surrounding flower gardens but the rural folks have to hunt for water to quench their thirst. Pathetic!

by voting BN, that would mean allowing corruptions to thrive. the longer BN remains in power, the more money they will rompak from sarawak.they will make sure that everything will be sucked dry out of sarawak before they balik kampung in 2011. all i can say is, these kind of sarawak voters are indeed gives life to evilness. these voters have no sense of justice at all.

Hi there everyone.
Akai rai, nama berita Unggal aku The Broken Shield? I missed you for quite sometimes already, agi steady neh?
Well, being an iban, i felt quite sad. My experience as an iban does tell me that even those with the square hats are thingking simple like the one with square nut. Probably we are tuned to be like that.
I mean if we iban are well informed in our thought and about our sorrounding, that will trouble the YBs, right tuai? Nadai kok enggau ia meh.
Those employed in the govt service are just to happy with what they are now. They accepted the term that they are there to make up for the lots. Tau bekayuh aja tang enda ka nyadi juragan.
tq

What's a pity? Anywhere it's never too late. Why wasting time waiting 11th Malaysian Plan? Keep asking now and never give up or give a clear message to BN government that you people were going to boot them out in the next election. If they know you are going to vote them out, then they will quickly give you the needs you need. I think they act faster than the lightning. Like the recent Batang Ai by-election, they give everything they can. For example, the longhouses that vote for the opposition get the most grand amounting to RM150++++ thousands. You see they can if they the want, but because all this while you are being obedient to them so they kept this money until one day they really think that they need your voters only then they disperse the money or projects.

If BN government want a continuous support from the rural electorates, it must fulfil all its promises and obligations. In Meluan, we have been waiting for fifteen years the construction of Nanga Entabai - Rantau Limau Ulu road and Pakan - Engkamop road to be tar-sealed which the government had promised since the seventh Malaysia Plan. I am not questioning the sincerity of the BN government in giving out these projects, but the people in my area hope that these projects to be implemented as soon as possible if it needs a continuous support from us.

to: Meluan voter and all BN supporters

Vote the worst and get the worst. That is the best description after a lot of reminder. They get RM 5.00 that day. Shouldn't that sufficient for one term of stupidity?

Go and see Jabu and Masing and ask them what the fcuk where are the promises they made.

Clean water is the most fundamental basic need for human regardless of their status.

The duty of care lies on the State Administration to provide this much needed precious necessity. Respective constituent YB ought to be accountable and responsible placing this necessity on a priority list. WHY DID THE YB ALLOW THIS TO HAPPEN and WHY HAD HE NOT PURSUE/FOLLOW-UP ON THE MATTER? Part of the reason why majority of the YBs refused to visit their constituents are none other than broken promises they had made - all turned into false hopes. Respective YB should now go and fix the problem whatever it takes.

The most crucial aspect without having clean water is the impact and implication on health especially the young children, infants an the general community leaving in the area. Dysentery / water borne diseases is the last thing we want to hear plaguing them.

This is a serious issue that must be dealt with/addressed without delay. Whoever the BN YB is, wake up and get all your acts together. Do something for all these poor longhouse folks in return of their vote for you. Water is their basic right - don't fail and deny them on this precious necessity.

"When will we ever learn?"

I suppose its the weakness embedded deep in the minds and hearts of human. Have we done enough to change the way people think or rather a mind-set change? - least its not too late?

Its truly a sad episode, feeling a sense of anguished and passionate having read the plight of those longhouse folks.