Kickbacks: Who should be blamed? 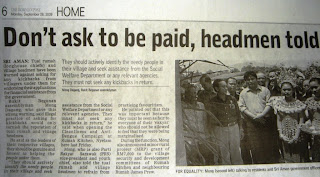 SRI AMAN: Tuai Rumah (longhouse chiefs) and village headmen have been warned against asking for any kickbacks from villagers under them for endorsing their applications for financial assistance from the government.

Bukit Begunan assemblyman Mong Dagang, who gave this strong warning, said illegal practice of asking for kickbacks would only tarnish the reputation of the Tuai Rumah and village headmen.

He said as leaders of their respective villages, they should be genuine and honest in helping the people under them. (The Borneo Post dated 28 September, page 6).

It is a good advice and a timely warning coming from YB Mong. We all know that many Tuai Rumah and Penghulu have been asking for “kickbacks” or “commissions” or “kopi o money” from their anembiaks before they sign any application.

But can we blame them for asking such “kopi o money”?

I would have thought that YBs and political leaders should be blamed, because they are the ones who have been “teaching” the community leaders to be corrupted. Come election, the Tuai Rumah would be called to assist in bribing their anembiaks into voting for the BN candidates. Some money would be passed to the Tuai Rumah who distributed them to their followers. Of course being the Tuai Rumah, they would be given bigger “commissions”.

Other forms of corruption include promising the Tuai Rumah some businesses, penghuluship, pemanchaship, temengongship, and even councillor posts as well as minor rural development projects.

Some Tuai Rumah have also seen some YBs receiving some “kickbacks” from timber or oil palm plantation companies which wish to fell timber or plant oil palm in their constituencies. Some YBs have also been asking from 10 to 20% commissions from minor rural development projects from those who are lucky enough to be given the contract works.

Reporting such corruption to MACC is wasting our time. We have lodged a number of reports before with MACC (ACA then) until today no action has been taken.

No wonder the Tuai Rumah and other community leaders are getting bolder nowadays in asking for “kickbacks”. – The Broken Shield

Source: www.thebrokenshield.blogspot.com
Posted by Jetty at 1:28 AM

This dirty habits are perpetuated by non other than BN. But if the tuai rumah ask for a few ringgit, then I think they are fully qualify to take some money. After all they are also human beings and with only a token salary from the gov't they can barley survive.

Compare to what those crooks have taken, this are only peanuts.Mong Dagang is only trying to play hero when infact he should be championing to raise the living standards of the dayaks by increasing the tuai rumah salary and helping the longhouse folks to earn some side income.

Most of the dayak YBs and MPs are just sitting duck. They have no interest in helping the dayaks and they are best at saying nonsense.look at today's Borneo Post(29/9/09), front page and you can get some ideal what masing, jabu and mawan is doing what they know best, tailing and pleasing that old white hair, hoping that they will be rewarded with some new contracts. that's what they are all interested.

I hope PR will take over and all these crooks will be put on trial , facing the same fate as Saddam Hussien.Lord hear my prayer.

This land is surely our land.We must fell all these crooks before they buried us.

The appointment of a village headman is the state government`s prerogative and not by election. That is why some of these headmen have doubtful characters, creating cliques and factions instead of uniting of their own communities.

I feel the headmen must stay neutral in politics, although they are free to support any political party. When appointed, they should be served with the guidelines relating to their duties and powers, including the list of disciplinary offences which they should not commit, otherwise they could be disciplinary dealt with including the termination of their services.

Only then the government can produce a democratic, well disciplined and responsible headmen.

A dog will only do what the master's asking. A parrot will say what the master told to say. No more than that. Jabu, Masing and Mawan though has brain (if they have)are not accountable for they are "ignorant". But if they are clever than their master the state of sarawak will be hancur. Thank goodness for barking and chipping like dogs and parrot and not more. If they can be dumd and deaf towards the suffering of their own race now, worst will be if their are clever than their now master. So stay stupit and dumb

Good leadership will guide their subordinates with good example from the first step they stood as a leader.

Go on and ask more money from Pak Uban but make sure it is from his personal pocket money.

We cant afford to lose more Rakyat money to fulfill these bastard demands.

Until the powers that be, i.e. the BN government, stop this bad habit they can't tell others not to do it. Corruption has permeated through Malaysian society and everyone who has an opportunity to be on the take is. It is a cancer that has spread. The only cure is to cut it out which would mean dislodging the BN government.

We have heard again and again about those crooks.Recall the one in selangor who built his house like a palace but don't live long enough to enjoy it. sound familiar! And another who was also a selangor vip who also have his mansion built like a resort. Ever heard of our white hair who have all the sarawak contracts in his drawer.

So what is so great about those tuai rumah who take a few cents here and there.Mong Dagang should be ashamed of himself for highlighting this garbage.

I personally think that if all the politicians were to be forced to slaughter chicken infront of the Buddha, searing that they never took any dirty money, I bet they will all disappear.

Leadership by example is a slogan that should be written across the forehead of Mong Dagang.He just never walk his talk.Grow up Mong!

Forever this land will be our land and those who conspire with other to steal our land shall forever be dammed.