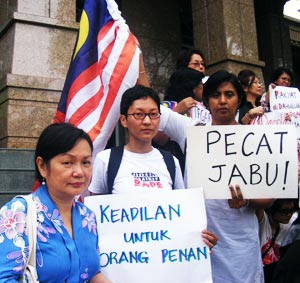 KUCHING: A State PKR leader Dominique Ng has described as farcical and negligent, the attempted denial by some senior Sarawak cabinet members, especially Alfred Jabu anak Numpang, a Deputy Chief Minister, of the findings of a federal report confirming the occurrence of rape against Penan girls in 2008.

“Jabu who is the minister responsible of Penan affairs should resign from all his posts to take full responsibility for the whole debacle which has now brought tremendous shame to the people of Sarawak,” said Ng, who is the state assemblyman for Padungan.

“The whole cabinet should tender an apology to the Penan people of Sarawak,” he stressed, when commenting on the reports of rape and sexual abuse against Penan girls and women. 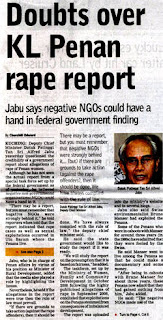 He added: “The State government should immediately release the long overdue report in its entirety. It must give a just account to all the people of Sarawak and Malaysia.

“Police and court action must immediately proceed to return justice to the victims and their families,” he said, pointing out that the Police must be seen to be effective in combating crime, and public confidence in the criminal justice system in Sarawak must be restored and promoted by due promptness and effectiveness of the relevant authorities in action.

“The persecution and the sorry plight of the indigenous people of Sarawak occur repeatedly and this is a situation that cannot be tolerated by all decent Malaysians.

“State cabinet ministers concerned should be ashamed of their futile attempts to camouflage the commission of such insidious crimes against our own Sarawak people.

The international reputation of our beloved Nation and State has been severely compromised,” he said.

The occurrence of rape of the Penan girls was raised by Ng in the Dewan Undangan Negeri, Sarawak, during its November 2008 sitting after the initial exposure by the Bruno Manser Fund website in mid-September.

The Star newspaper had on 6 October reported on and confirmed the allegations based on its own on-site journalist investigation, which State cabinet ministers, MPs and State assemblymen had described the reports as “untruths”.

Even when the reports on the rape have been released and are found to contain some “truths”, there are some Cabinet ministers especially Jabu who question the credibility of the reports. – The Broken Shield

Source: www.thebrokenshield.blogspot.com
Posted by Jetty at 1:12 AM

assuming jabu will resign, he will be replaced by others who would be equally evil as well. as long as taib mahmud rules over sarawak, anyone will shout their mouth. nobody will be allowed to expose the truth after being silenced by taib

The ministry has all the resources to finance to establish the truth, in so far as the issues are concern. Why dragged their feet. After all it need to be resolved unless, like all the many issues, stall time and brush under the carpet? Thats the best they can do, those half past six MPs.

The rest are just “grandmother stories”.
Get to the point and get it done.

In a corporate world, we do not harp upon an issue but find solutions to resolve it. It will make the company close shop when issues cannot be solved.
Here, better the BN close shop and let others with the capability and the willing desire to do it.

No need to ask him to resign. If his voters still like to keep voting for him, do not come out complaining your NCR lands are taken away right under your eyes. Simple choice.
malsia1206

That is the mindset of Jabu who thinks that he is always right and those who criticise him are always wrong. What he had said before regarding the sexual abuse of Penan girls has been proven wrong and he even questioned the credibility of the report made by The Ministry of Women, Family and Community Development on the issue.

The police on the other hand gave an excuse that NGOs were not giving them cooperation in their investigation and that hey did not have enough funds for a joint investigation with NGOs into the alleged rape cases. If there are murders occurring in the same areas, is police also going to say that they get not enough funds to investigate the cases?

Pathetic! Billions of ringgit could be spent on less important projects that only benefited the ministers and their cronies, but the government gave insufficient funds to the police for the maintenance of law and order, the apprehension and prosecution of offenders.

the rape of the penans have been cover up so many times and for ages. Today we hear all this truth becos we are lucky to have internet.

Years when logging started in sarawak, the rape have been going on but the gov't turn a blind eye becos no one publicize all this .

This is the reason our Penan bethren must settle down and not roaming around in the jungle. Otherwise they will forever be exploited by opportunist (whoever they are) They must get good education if they want to move forward as a society. This is already 20th. Century, they must be prepared to face the borderless world. There are no two ways about it. Their destiny is in their hand and the choice is theirs. Cheers

For saying that Sarawak is outside of Malaysia....honest mistake or ignorance? We cant forgive u lady! Not the 1st time we heard this slip of the tounge by our so-called compatriots *sigh*

It's time we all start to boycott all business that belong or associated with jabu. A few towers behind King's center and a few badminton courts nearby, just to name a few.

He is getting arrogant becos he have the blessing from that white hair.We just can't sit quietly and hear this crook fiddle while sarawak burns.

Make hay when the sun shines.

Penan who involve in the rape case is not ROAMING in the jungles anymore! In fact they're the schools student! They're the settled one...most of the Penan now settled, we never heard much complaint from those who still nomad, but most of the problem is involving those whose already settled.

..education for Penan???most of the Penan can't further there study to tertiary level of financial barrier.

Meera, on ur mistake...for me that's not the issues. Keep going, pls!

jabu jabu jabu I know and you know what the penans have gone through. stop pretending and do something!!! do something good once in your life not only for your family but the community as a whole. you only hear the praises from the people around you who want something of you...hope not your arrongant. but there are thousands out there cursing and hexing on you for the wrong you has done. before your dismissal from earth repent and do something good so that your soul and you family will be at peace. fear GOD and not white hair ok.

Have you all been to Penan area before? If you never, do not make such kind of baseless comment.TQ