After an absence of more than two years, it is good to visit Kapit again where we met many relatives and friends. Although Kapit is perhaps the only town which is not connected to any town and other divisions, it is fast growing not only in terms of physical development, but also in other forms. 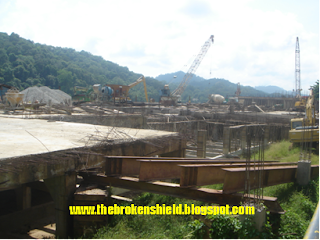 The Kapit water front is believed to be one of the biggest projects now under construction in this little “Hong Kong” of Malaysia. (At night Kapit is very much like Hong Kong, where we can see many beautiful lights coming from houses built on top of hills.)

Cost of living is one of the highest in Sarawak. Fish like “ikan empilut”, “ikan padi”, “ikan Labang” are now very expensive. Not to mention “empurau” which costs RM500 a kilogram, “tengadak” and “semah” cost between RM100 and RM300 a kilogram. Wild boar meat which was used to be a common dish in those days has now become a rare item. So are other jungle meats. 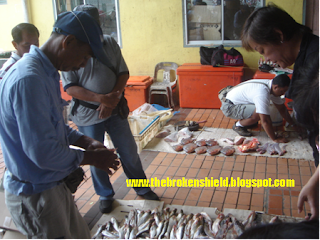 Prices for vegetables and jungle produce have also increased tremendously. Hotel accommodations and costs of houses have also soared up as a result of high costs of petroleum. A double storey house which cost RM250,000 per unit two years ago now costs RM320,000 and more. 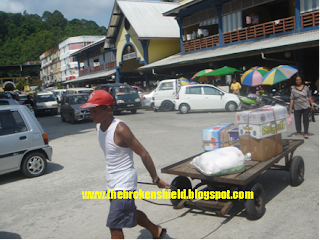 On Sunday, Kapit is really packed with people and vehicles. It is said that there are more than 400 van “sapu” and 4,000 Kapit registered cars and several thousands other cars. As there are very little roads in Kapit, you can imagine cars and vans coming to the town, making Kapit the town of cars and vans. 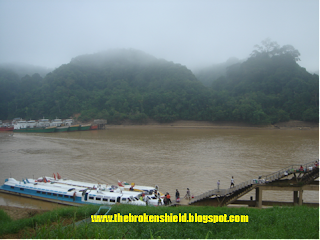 Express boat is the only mode of transportation to Kapit

The people of Kapit put their blame on Dr. James Masing, Minister of Land Development for the lack of roads in Kapit especially a trunk road leading to other towns like Kanowit and Sibu. Masing, according to them, did not agree for the construction of the trunk road as there were no economic activities. 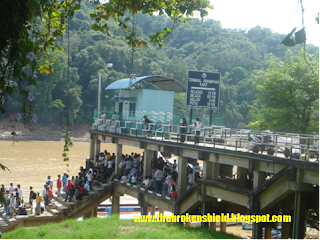 In a recent cabinet meeting, Taib argues that such a trunk road will make Kapit a “dead” town as everyone will not spend the night in the town. Secondly, the road has no economic value even though it will pass through literally hundreds of longhouses and will likely open up thousands of acres of NCR land for agricultural activities. And thirdly, the state government does not want the express boat and tongkang businesses to suffer.

But the State government will carry out upstream development and has in fact come up with a master plan which is part of the Sarawak Corridor of Renewal Energy (SCORE). Three roads will be constructed: one from Kapit to Baleh dam and Putai which is about 56 km, another to Murum dam which is about 45 km and the third road to Bakun, another 68 km.

The construction of the roads, dams and other projects are expected to cost some RM 7 billion. Rumours being spread around are that the road to Baleh is allegedly given to Parti Rakyat Sarawak (PRS), to Murum to Sarawak Progressive Democratic Party (SPDP) and to Bakun to PBB.

Although early this year, deputy minister of works, Yong Khoon Seng, announced that the trunk road will be built connecting Kapit to Kanowit and Sibu; initially the people of Kapit were happy, but it seems now that the proposal remains a proposal.

But the people in the interiors between Kapit, Song and Kanowit are just unlucky as they have to be contented with using rivers as their main communication and transportation. Can they wait for another 46 years for their dream road to be constructed? – The Broken Shield

The obvious beneficiaries of Kapit Road are the Dayaks. A proper road from Kapit to kanowit would open a wide stretch of Iban’s land, and ultimately changing the economic dynamics of Rejang Basin.

Connecting underdeveloped rural communities with the outside world is a primary objective of World Bank and Asian Development banks. Absence of rural road is equivalent to bleak and dark economic opportunity

However, Kapit should be seen in a very different perspective. I do not subscribe to the finality of one man’s decision for Kapit’s inaccessibility. Thousand and millions of cubic tonnes of timber have been extracted in the surroundings of Kapit. The taxes imposed could easily finance dual-carriage roads from Kapit to any part of Sarawak. To prove this point, count the number of timber-millionaires (& billionaires) from Kapit. The priority of a connecting road is more our perspective rather than the leadership and inhibitants of Kapit.

In the recent Al Jeezera interview with Dr James Jemut Masing, he categorically stated the operation of the ballot box as an expression of the people’s wish. Come next election, we can almost be sure the present administration would be returned into power – Kapit included. This clearly shows the divergence of what we and they see as pertinent. Broken shield sees this as an issue; Kapit people see otherwise.

I do not subscribe to the notion that Kapit are unable to choose; limited by both/either intellect and choice. Kapit produced many intellectuals within the 46 years of independence. Whether fish, wild boars, houses etc becomes expensive is also relative. How do you know? To them they are not – otherwise they would have used the ballot box.

My summary – as the Cantonese used to say – “mbo yeah” – no nothing.

Sometimes we are so blind and subservient to our own apathy.After all the incidences of being cut off from the outside world by low water levels, drought etc how can the people of Kapit still think that roads are not of utmost life saving importance?Look at all the remote towns who need these road networks , what has improved after all these politics of development..what did they get .. promises and more promises and whitewashing.. I really weep for your naivete.
Why don't they ask their councillors their DUN their YBs their Datuks and all those grandly titled civil servants what happened over these decades of "developement" and progress?Why are their lives so cheap to these people?

Come on Dr. James, YB Alexander and YB Larry, do somethings will you. Pending udah tebal ninga orang komen macham-macham about Kapit. If Mukah being a sub=district before and has tremendously developed now, why can`t Kapit? Is it because Kapit is premodinantly Iban area. whereas Mukah.......?

Siti aja komen aku ba artikel nuan ba para 2 madah ka muniy tu: 'The Kapit water front is believed to be one of the biggest projects now under construction in this little “Hong Kong” of Malaysia. (At night Kapit is very much like Hong Kong, where we can see many beautiful lights coming from houses built on top of hills.)