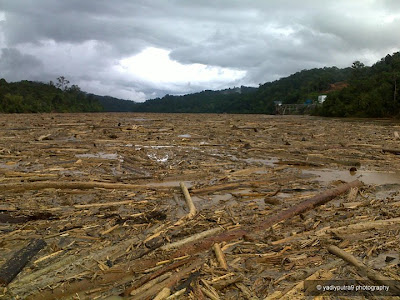 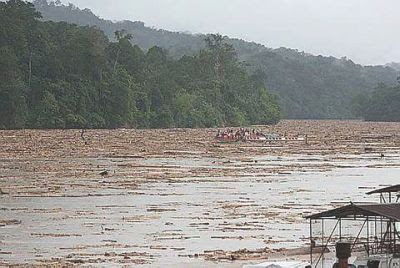 This is the headline of The Star dated 8 October 2010. The story was illustrated with pictures of tonnes of logs and wood debris drifting down the mighty Rajang River near Kapit, temporarily trapping a ferry and passengers.

The Star described the phenomenon as a “major environmental disaster unfolding in the state, as kilometre after kilometre of logs and wood debris flow down the Rajang.”

It was believed that heavy rain in the upper reaches of Baleh River, a tributary of the Rajang had caused landslides at log ponds of a major timber camp and brought down the logs and wood debris.

River transport was cut off when the logs and debris started filling the entire width of the river by 4.00 pm. It was first sighted at 1.00 pm.

And by 7.30 pm the debris was reported to have reached Song and was expected to hit Sibu early in the morning.

As this was the first incident, government authorities were not prepared to deal with it.

Doomsayers connect the incident with the impoundment of Bakun Dam this Sunday, a warning to those who live down river. In future something a much bigger, even bigger than tsunami can happen.

There are those who believe that it is a curse on those timber companies who have no respect for the spirit of the jungle, the spirit of those Dayaks who have departed ages ago and the customs, traditions and taboos of the natives.

The curse has incurred losses to the timber companies in the hundreds of millions of ringgit.

As a lyric of an Iban song runs: “Sepi asai nuan, sepi asai nuan” (serve you right).- The Broken Shield
Posted by Jetty at 12:33 AM

James Masing blamed the disaster on uncontrolled logging in the upper reaches of Baleh River, the constituency he is representing.

A local in Kapit said a possible explanation could be seen bank erosion in Baleh which was a logging hub.

An elderly Chinese in Sibu said " Because of human destruction to nature, so Mother Nature wants to punish the greed of human activities.

Now I am asking, is it possible the phenomenon to concur The Auditor-General`s 2008 Report on Sarawak`s poor forest management that led to river pollution, erosion, landslides and destruction of flora and fauna?

The AG`s Report stated that Sarawak was one of the four states poor in its forest management. The other states were Kelantan, Pahang and Johor.

However, the report came under fire from several state authorities especially Sarawak Forest Department director Datu Len Talif Salleh who questioned the logic of the report.

If you are a Council Negri Member ask the Director of Forestry to give a good explanation else suspend his salary for 6 months! Or better still, bring him to court for his negligence in his work.
Anywhere, don’t trust on the Director else JKR Director will not sit there forever giving no chance to others at all?
All Directors should not be extended when reach retiring age!
Well, ELECTION is coming, will you be able to warn your folks; beware of the power of $, threats (like causing Daniel Tajem to lose his seat), no speed-boats or transport for the opposition….. or BLACKOUTS just as the ballot boxes are to be opened and got counted!
Good luck.
But, don’t be surprised if BN (Taib) wins with landslide victory again!
Anoynomous 10

“Sepi asai nuan, sepi asai nuan” to all the voters in Batang Rejang who vote for BN. Ikan Masing constituency the source of the problem....what can he do if he had income from these logging company? Besi buyuk makai duit kayu nuan masing?

Wake up James Masing! Barking up the wrong tree is not much help. You are part of the government machinery that issues logging licences. Don't blame just uncontrolled logging. The blame lies squarely with the government agency that monitors logging activities. Everyone knows that corruption is the cause of this log tsunami.

Everyone turned a blind eye on the AG's 2008 report. Awg Tengah even challenged the report..

Everyone is not prepared for this kind of disaster..

James Masing refuse to blame the loggers as he is scare to offend Taib's cronies.
This thing only happen when there is no control over illegal logging and there are no law to curb the disposal of unused or wood remains. Branches and reject woods are dump into the rivers. These timber companies treated the rivers as their waste dumping ground.
Actually the authorities must set up a river authority who can check the illegal dumping of waste and woods into the river.
But I think these authority will be corrupted by the timber companies becos these companies are rich.
Let this incident be a wake up call and if no action is taken, disaster are bound to happen.
We won't see any concrete action taken by this gov't becos they are too corrupted to do anything.
Only if we change this gov't then will we see some action.

Jabu, Masing, Mawan, Manyin etc etc. The (river) disaster is the result of your political betrayal towards your own (Dayak) race. The reward for your traitorship includes timber consession and land grabbing from fellow Dayaks for you, your cronies and associates.

The damage has been done,and all blames are squarely on those in the corridor of power including you James Bitter(MASING)..Its your turf and,a calamity of this level has occured,in which you fail to monitor or conviniently closed your two eyes.
Why cry over spilt milk,when you could have prevent it or through various agencies in the government?
Are or were you having no power,or to scared and to submissive to your big boss Taib,that you dare not voice your concerns earlier?
Or,because your election funds,depend on the goodwill of these timber tycoons?
Surely you know the biggest and most disadvantageous community suffering from this catastropy are the Ibans and orang ulu,who has without fail return you to power for the past elections.The Ibans expect more than just MRP,you as YB knows their hopes and aspiration.Please don't try to defend the indefensible.
You should now be

The pollution and clotting of Rejang river by logs and vegetative debris as a result of erosion and landslide is the biggest environmental disaster that people in Sarawak have ever seen in their entire time. Why is that a disaster at this magnitude, and yet no government ministers expressed their concern to the communities, and to issue warning of danger using water transport. All we can say to all these ministers, and in particular the Dayak YBs, they are just gutless and have no guilty conscious for their fellow suffering communities.

The biggest hypocrite of them all and turn-coat out of this disaster is James Masing, who, in his early days, was the most vocal in his criticism and protest of forest destruction in Rejang area. And now, look at him, he cannot say a thing that may displease Taib Mahmud. Masing is completely under the control and under the thumb of Taib. And let see if James Masing is the biggest storyteller of them all about this disaster. We, the rakyat have been fooled all these years by these selfish Dayak YBs, let all rise up and change the government. Let the people power triumph through the ballot box. Let all see the day of change. Bernard.

The next so called natural fenomena will happen to Murum, Linau and Balui river where unsrupulous activities are left unchecked- even then Len Lattif still insist logging manangement in Sarawak, the best in the world. Beware our friends living along the Rejang Basin. If such incidence occur in any of the above river, then unimaginable things will happen to Bakun Hidro which is tripple the impacts of the Balleh river. Anyway our poor Dayak leaders who once upon a time were vocal on the logging issues seems friendly to statement made by the NREB and SFC directors- Maklumlah perut sudah kenyang. Tunggu ia meletup sahaja lagi.

Dont jump to conclusion,incident at Rajang River has never happened before and the cause needs investigation said Masing beloved CM and this statement is directed at and meant for Masing himself.Masing is always quick on the draw from the hip and in the process shots himself in the foot.So Masing who is the better storyteller-you or Taib or who is telling or who is making story.Taib has pressed the MUTE button on Masing and come this Thursday Cabinet Meeting Masing will be dumb and deaf,after all as we are reliably informed he has never articulate on Dayak issues nor has he raise anything meaningful for the Dayaks during Cabinet Meeting.Taib knows Masing needs,not the Dayaks needs,to keep the Dayak in check in the short term.Masing concern is that he is to senior to Mawan and aspires to be better than Jabu.

Minister in charge of Environment, Sarawak, Song Koh says, he will ....

All timber companies, plantation companies and ALL parties who have "robbed" the rich natural resources of Sarawak should spring into ACTION, ACTION, ACTION !!!

I we can mobilize police for peaceful demonstrations, why can't we .. The gov't of the Day MUST BE AGILE!