Machinery and quarters burnt down 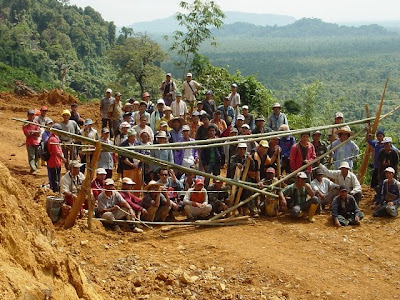 SEBUYAU: Fire on Monday afternoon (18 October) destroyed a block of two storey quarters occupied by timber workers, a store, six tractors, two logging trucks, a pick up and an excavator belonging to a logging company.

Six tractors were left in the forest, while two logging trucks, a pick up and an excavator were in the camp site when they were found to have been destroyed by fire.

The destroyed properties are owned by Royal Billion Sdn Bhd, a logging contractor of Quality Concrete Holdings. Chief Minister Abdul Taib Mahmud’s sister Raziah is a director of the company.

The amount of loss is yet to be estimated.

It is not immediately known how the fire started or who were responsible for it.

The logging company, Quality Concrete Holdings, has been in the centre of dispute after the Forest Department has given it a licence to carry out logging activities in the disputed 3,305 hectares of forests which the Ibans from six longhouses claim to be their NCR land.

When negotiations failed the Ibans have also brought their case with the Police, the district and resident offices, the lands and surveys and the Forest department.

When all these failed, the natives since last Friday have erected a blockade (see picture above) to stop the workers from the Royal Billion company encroaching into their native customary rights land.

They have also stopped a "tongkang" from loading timber that has been extracted from the disputed area.

Nicholas Mujah, one of the leaders from the six Iban longhouses, said the villagers were not aware of the fire as they have been stationed at the blockade.

He said that it could be the work of arsonists who want to put the blame on the villagers.

“The villagers who put up the blockade are about four kilometres from the camp site and they were not aware what was going on in the camp.

“It (fire) must be the work of people who want to put the blame on the villagers,” said Mujah, urging the police to carry out an immediate investigation.
Posted by Jetty at 11:41 PM

I don't feel bad about their loss. They may have done that themsleves because the license expires in November. This way they can get the insurance money and recover their losses.

LOYAL BILLION is owned by Robert Tiang, one of the sons of Tiang Ming Sing's, who owns Quality Concrete Holdings.

I hope it is not the work of arsonists. If so, it is an offence of mischief by fire under section 435 of the Penal Code punishable with imprisonment for a term which may extend to seven years, and shall also be liable to fine.

I am sure the owners of the destroyed properties will make a police report for the police to carry out an investigation.

Believe me, the police will get through the case and arrest the culprits if it was the work of arsonists.

Hope the Police will use their wisdom to properly investigate,and not to simply arrest .I agree with Mr.Nicholas Mujah,there was a high probability that such an incident was a coy deployed by the timber company to make the landowners look like the culprits.Whatever it be,the company must have known the risk and should be aware that the natives deserve respect and the constant harassment and disrespect of their rights could be tragic,the batu niah case in the late 90s was a classic example.So,while everyone wanted to be rich,don't bulldoze your greed on others.

I'm sure the enforcement officers will act fast bcos of this special case, but what action has been taken when the villagers lodged report earlier???

WOW, a easy way out!

It was reported in the Borneo Post today that the owner of the logging company had made a police report of which more than 100 arsonist allegedly took part in causing the destruction.

Hopefully, the police will handle the case professionally and at the same time to defuse the tension. We don`t want untoward incident happen which may claims human lives.

We have just received the news that the Malaysian police have arrested Nicholas Mujah, the Secretary General of the Sarawak Dayak Iban Association (SADIA) and six Iban villagers, including the headman of Kampung Bajong in Sebuyau, Sarawak.

We must be united to rally behind SADIA and its officials when they are fighting against injustice and humanity crimes committed against the rural poor. We urge the police not to go for a wish hunt and allow those who were arrested access to legal representations.

Rural Dayaks no longer perceived themselves as weak and hopeless when they faced fragmented determination to defend themselves against the high and might logging operators, plantation owners and contractors and last but not least some law enforcers working in cohort with the rich towkays.

All concerned NGOs, Pakatan Politicians and MoCS should also be united in their stance against these bullies who relied on their political connection to flaunt the laws to plunder and destroying habitats, environments and livelihood of the rural poor.

we dayaks, iban especially must start giving donation to SADIA. iam ready to give say rm10.00 monthly to SADIA. this move is to prepare our community to face challenges like what is hapening to our friend Mujah and the few TR arrested, to ease their hardship and to pay for their legal matters.
BUT i want SADIA's account to be managed by a person of credibility, no more crooks. To find someone to manage the account does not necesarrily come from SADIA's circle of friends, it should be open to members who contributed.
contact me thorough sentiasa_segar@yahoo.com, tq