Fish fry project – a success or a failure? 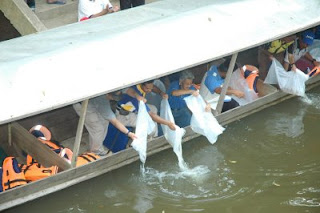 Each year thousands of fish fry of various species were released into rivers in the State to improve the diet particularly of the rural people. They include Empurau, Semah, Tengadak and both black and red Tilapia.

A native of Africa, the black tilapia not only adapts itself perfectly well to conditions of our rivers, but also upsets the survival of other fish. So plentiful it is in the market that some naughty people name it “Ikan Jabu”. It is so named because Alfred Jabu was the one who released the fry to rivers when he was Minister of Agriculture.

In fact Jabu is proud that the black tilapia has been named after him at least as a way to appreciate his efforts. And when he was questioned at that time as to why he was so much involved in the distribution of fish fry rather than the distribution of bigger projects that would bring greater benefits to the people, he angrily defended his ministry (agriculture) policies to help improve the nutritious foods of the rural people.

Although he is holding the posts of the Ministry of Infrastructure Development and Ministry of Rural Development now, he still continues to release fish fry to rivers. It is indeed his pre-occupation.

The efforts to release the fish began in earnest in the 1990s at the height of timber operations and extractions. Until today nothing much is heard of other species of fish as there is no study being conducted to determine the percentage of their survival or whether our efforts are a success or a failure?

Timber operations and extractions have caused so much sediment so much so that many “lubok” become “lansar”, and “lansar” become dry, thus literally emptying rivers of fish especially the Empurau and Semah types. This type of fish cannot survive in muddy or murky waters.

Now the State is all out to create a vast empire of oil palm encompassing NCR land belonging to the natives and land owned by the State. Pollutants and chemicals from the operations of these oil palm estates have further damaged our ecological system. Fish population is further affected.

Little wonder, therefore, river fish now, because of its rarity and scarcity, have become very expensive. Because of their good taste and scarcity, Empurau and Semah are the most expensive fish with prices ranging from RM300 to RM450 a kilogram. Even “ikan keli” (local catfish) costs between RM15 and RM18 a kilogram.

With all these fish becoming a rarity and the survival of the fish fry being released into the rivers is unknown, is it not true to say that the efforts to improve the nutritious diet of the rural people have ended disastrously? Secondly, how much money has been spent on this project since the fish fry project was introduced in late 1970s? What are the answers for these two questions?
Source: www.thebrokenshield.blogspot.com
Posted by Jetty at 11:24 PM

Tell me since Jabu take office,how many thngs that he have done are successful!Nothing!All that have been a success is his Queen court and Queen Tower at King centre.All this rented out to gov't dept.That is the price of his loyalty to the boss.
As for the releasing of the fish fry,it's a failure becos they never find out whether these fry are suitable in stagnant and dirty water.It's a waste of rakyat's money but Jabu is turning a blind eye to all this wastage becos he is making money out of all these failures.
Now he wanted to prolong his greediness by anointing his son Rentap to join in ,looting this state of everything.
It's time for the dayaks to sharpen their parangs and chop off these rotten and stinking leaders, for they are not only a burden to us but also a shame to all the people of sarawak.
Time for us all to say 'NO' to these corrupted leaders and vote in a new gov't.Let us all grab this window of opportunity of a lifetime and kick these corrupted leaders out.CHANGE is what we needed.Yes,We can!

We need new blood to take over from these old and useless guards.They are too old to carry out the duties assigned to them .most of the time they are taking nap and holidays.We need young and energetic ,brilliant guys to lead us into the next centuries.Don't you all get bored hearing people like Alfred Jabu,George Chan,William Mawan,Etc,every now and then.Yes,We can!

What about his another big failure project - planting and harvesting kepayang...!
Jangan2 Jabu sudah mabuk kepayang..!!!!

Abondoned and rejected by his own community, Jabu now turns to the Bidayuh hoping to find solace. To prove a point, he will be having dinner with DBNA at DBNA headquarters tomorrow night. And to tie up the relationship, Jabu is going to donate money from Salcra to DBNA. If I were a SALCRA scheme participant, I would lodge a report with the ACA against Jabu for misusing the SALCRA money for purposes other than for the participants.
Jabu's motive is clear. He is taking revenge against SDNU. He was not invited to attend SDNU dinner with the the Governor of Central Kalimantan recently. So he wants to be kind and generous to DBNA on the pretext of being kind-hearted man. If he is that kind-hearted, why dont he come out with his own money?
As long as Jabu behaves the way he does all those past many years, there is no way the Dayaks, the Iban in particular, will regard him as their leader.
He is a political leader because of Taib Mahmud. Without Taib, Jabu will not be the DCM.
In other words, Jabu's position in the government is at the courtesy of Taib Mahmud.
Ever wonder what would happen to Jabu if Taib Mahmud is no longer around?
Your guess is as good as mine.
It is time for Jabu to repent and seek forgiveness from the Dayak community. The earlier the better. Dont seek forgiveness the moment your are breathing your last.
If not all, I am sure a large number of Dayaks will forgive you for the misdeeds you have done to the community. May Petara guide you.

Borneo Post today 11.12.2008, Jabu blamed Bruno Manser for Penan Backwardness.
What happened to Jabu nowadays, always holding grudges, hatred and dissatisfaction to others. The mistakes is always others.
Hei, Jabu has forget all about himself, he is not Mr Perfect either. He is just ass-kisser.
Jabu is another joker or apai-sali in Iban community. People laughed and still laughing whenever Jabu's name is mentioned.
What has jabu contributed to the dayak in general, NOTHING..! he continues blaming the dayak for not supporting him and yang amat dikasihi taib.

A gentle reminder to Neil & all readers,

Firstly, I would like to express many thanks to all of you for your strong support & contribution to this blog.

I am really touched and honoured by your overwhelming responses/comments toward my articles.

However, I would appreciate if you can be more mindful not to use any 'threatening' words such as “sharpening the parangs”, "chop off the head" and “cutting down enemies” in your comments/postings.

This is to avoid unnecessary tension and problems to us in future.

This does not mean than I/we are scared of 'them' but I/we want to maintain proper decorum in our postings. I/we don't want 'them' to accuse us to promote violence and extremism in our pursuit to bring change in our community.

Lastly, I look forward to more meaningful and constructive comments from all of you in future.

Jetty, It's at your judgement that which words are deem to be 'too' hard for you to shallow.Since you own this blog and if you want us to comment,then whatever is written is at our judgement.If you think what we have written will affect your name and your chance of getting 'close' to Taib in future,then it is better you shut down your blog.
You are trying to be in comfort zone,Jetty, and I can say you can't have both.On one hand you want to a champion of the dayaks and on the other hand you want to be their 'pet'.Sorry,you keep your blog and I keep my comment.

Fish and more fishes? Most things touched by Jabu apparently is fishy too. By releasing fishes is not going to win the hearts and minds of the dayaks. The bottom line is, the fishes never get to mature to be eaten. What's the point of releasing fish into polluted rivers? It defeats its purpose. Maybe Jabu should start eating ikan jabu in order to prove to us of its nutritioner values. I for one would not touch those fishes for reasons amongst others the high content of toxins, pollutants from the oil palm mills.
Would appreciate it more if Jabu would start releasing Janit into the forest.

I appreciate your views & thoughts.

HOwever, the issue here is about maintaining a proper decorum in this blog, so that this blog is not like any other 'Tom, Dick & Harry blogs', if you know what I mean.

If you like to use that kind of words, then go set up your own blog lah..See how many people will response to your blog. Then you know it's not easy to come up with good articles.

And it's up to u whether you want to continue reading this blog or not. The choice is yours my man!

Best regards to you..

This is your blog and you have the right to moderate the comments. If Neil is not happy how your blog is run, written or manage, then he should stop reading your blog and stop leaving inflammatory comments. If he such a brave person, then why did he restrict readers to his blog http://neil-neilblog.blogspot.com Is he a coward to open his blog? Neil I challenge you to open your blog for public consumption instead of by invitation only.

Jetty I am in full support of your statesman-like comments. There are big issues of social justice, cultural identity, and economic development to address, affecting all ethnic groups in Sarawak. People have a right to be stirred up about injustice and the urgent need for change. But we need to focus on carefully analysing and exposing the policy failures and corruption that are the cause of injustice, not on ambiguous and potentialy inflammatory outbursts that invoke a more violent past. The big issue this excellent blog has raised is how can Dayaks turn their sense of Dayak identity and community into a new multi-racial "politics of social justice" to supersede the cynical "politics of development" that has served the interests of a few at the expense of ordinary people of all ethnic groups.

I don't know what's in NEIL mindset or STONEhead? ..he wants to do provocation or ka ngausuh kitai belaya? too aggresive.....but to all bloggers..don't layan or reply to his/her comment anymore..thanks Jetty for your wise advise to this moron..