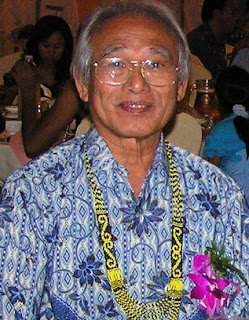 Dato Sri Daniel Tajem’s presence at Parti Keadilan Rakyat (PKR)’s 5th National Congress at the Malawati Stadium, Shah Alam last Saturday not only caught 200 Sarawakian delegates and observers by surprise, but is also expected to generate some reactions from his political foes or friends.

Upon hearing of his arrival which was announced, many of them rushed to greet him; they did not expect him to be present, so they were extremely happy to see him around. Tajem’s invitation was made through The Broken Shield. Only a handful of people knew that he had accepted Anwar Ibrahim’s invitation.

Tajem used to tell his supporters to be cautious either joining UMNO or PKR. He neither encouraged, nor discouraged them but advised them to wait and see. “We do not know what plans Anwar has for the Dayaks,” he said.

Likened by Anwar Ibrahim as the “star” or described by Yong Teck Lee as the “icon of Dayak politics”, Tajem is still the man to watch in Sarawak’s politics as people still listen to him. Thus his presence at the congress is sure to give all sorts of indications and interpretations to young Dayak professionals and thousands of ex-PBDS members; it can mean giving them the “green” light to join PKR at a time when Dayaks have failed to register a party of their own like Malaysian Dayak Congress.

In view of this failure PKR is therefore considered to be the most “suitable” party for them through which they can articulate their aspirations and address their frustrations and at the same time play national politics. It will not be surprising to see Dayaks joining PKR in droves in the immediate future.

But for Tajem, adviser to protem Malaysian Dayak Congress, accepting the invitation was one way how he could assess or evaluate the seriousness and commitment of PKR’s pledge in trying to dislodge Abdul Taib Mahmud from his 27-year old rule of Sarawak.

Personally, he said, he did not harbour any ambition as age had caught up with him. “But what I want is to see change in Sarawak. I don’t care who is going to be the Chief Minister after Taib, be he Malay, Chinese or Iban, as long as the policy on Native Customary Rights (NCR) land is changed,” he said to The Broken Shield, and added: “The land that has been seized must be returned to the land owners. This is our priority.”
Posted by Jetty at 5:53 PM

Welcome Tajem,As expected,your name is propping up everywhere ,coffeeshops,express boats,bus,gatherings etc.Now been the paramount chief,it's time you start doing something about the 'lost dayaks' in sarawak.If partnership with Leo Moggi,the impact would have been more great.I hope you and Leo will be attending the PKR dinner on Jan 14.Lots of people,not only the dayaks ,are eager to see you all former dayak leaders join up and leading this fight to topple Taib.Together and with determination, all dayaks will triumph.

'The (NCR) land that has been seized must be returned to the owners,' thebrokenshield quoted Daniel Tajem who attended the PKR National Congress in Shah Alam last weekend as saying.

This and other major issues like abuse of power, nepotism, corruption, violation of native rights to the lands,etc are factors that will bring aboutthe downfall of the Taib led Sarawak BN Government.

There were many people of all races out there who did not turn up at the PKR COngress but nevertheless shared all the hopes and aspirations ofthe party leaders and members for change in this country, both at the State (Sarawak) and Federal Level.

Yes Broken Shield, all land seized must be returned by whatever means.

Do Daniel Tajem's comments signal that he has moved beyond Dayakism and the hope of a strong Dayak party to embrace the multi-racial "politics of social justice"? If so, I think that is a good sign for the future of Sarawak.

I agree with your that Dato Seri Daniel Tajem, inspite of being on in years and no longer head of any political party, still has some clout especially in Iban areas.
I respect him. Many people still respect him. Keep it up , Dato Seri.We are with you. Kaban kita.

Hope that thru' PKR, Adit and Datuk Daniel Tajem could bite more than their bark. Don't be an another disappointment to the dayak.
As in RTM Kuching news today, Awang Tengah said to give land title to all longhouses in Sarawak. This will later become another major problem to the dayak, as the longhouse will tend to extend or move to new location.
If BN Sarawak (PBB,SUPP, SPDP & PRS) are sincere enough in their effort to win more votes from the dayak, just issue land title to NCR lands.

How gracefully Daniel Tajem has aged and may his wisdom guide the people of Sarawak to the land it once was.


PBDS oh PBDS, how I love that party but as the saying goes only after a ship was sunk we get to hear all opinions about how it could have been saved. How I wish for this 'James anak Bond' had live in flesh and blood among the people in PBDS. The least he could do is to chain up Tajem and Masing to opposite walls and allow the house to prepare a complete Annual Returns to ROS and make way for the party to hold the TDC. It could have been a different ending for PBDS.

To err is human, to fogive is divine they say, but in this case, that human error is so unforgiven that even all the Petara in the Dayak country would find it hard to forget for as long as the Ibans and the Kayans walk on this island.

Remember PBDS ! A lesson learnt ! Hopefully this tragedy remain as a constant reminder to the younger generations of Dayak.... if anything, by now it should dawn on them that the 1000 of Masing and 1000 of Tajem would not measure up to one of PBDS.

The rise of PBDS in 1983 brought joys to every dayak homes in this country in that this party would continue to carry the hopes and the pride of Sarawak Dayak, the crown prince of Rajah Brooke; the fall of PBDS 20 years later had shamed us and buried our aspiration in the mud; the ruin remain now as ugly monument in the memory of every living dayak. Where are we going from here? Duh! How would I know, dude. I'm still mourning our loss.

What will happen to me after this? I can be a better dayak, highly motivated by our failure and quit making the same mistake... or I can join the rest of Masing and Tajem and Salang and Moggie and Ah Hua to make yet another political breakdown in the history of Malaysia, from which deed we can only salvaged little but our ego.