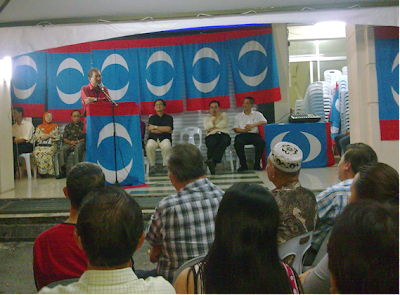 KUCHING – Former Health Minister Chua Jui Ming has called on Sarawakians to realise their mistakes in supporting the State Barisan Nasional government which is full of corruption.

“Whether you are Chinese, Malays or Dayaks, you must ‘bertaubat’ (repent) from your mistakes and stop support the parties in the State Barisan Nasional government which leaders are corrupted.

“I was a leader in MCA and I was part of the corrupted BN government. Now I have repented and joined the Pakatan Rakyat,” he said at a Chinese New Year gathering organised by Sarawak PKR at its headquarters in Kuching on 11 March 2010.

Chua met PKR leaders in Miri, Bintulu and Sibu since 8 March and had also visited longhouses and villages, many of them are bereft of electricity, water and other basic amenities.

“I visited Rumah Panjang William in Miri and what surprised me is that the longhouse has no electricity and water.

“All the young men and women have gone somewhere to earn a living as they cannot work on their lands that have been robbed by the State Government,” he said.

He said: “There are rampant corruptions in the State resulting in Sarawak becoming the second poorest state in the federation of Malaysia despite the fact it has forests, gas and petroleum.

“Tidak masuk akal (no logic at all) that the State is so poor,” he said, and pointed out that one leader in Sarawak (he did not name the leader) was so rich that his money is three times as much as Robert Kuok’s od US$14.5 billion.

Kuok is reported to be richest man in South-East Asia and number 33rd in the world.

“What is the answer to all these miseries and poverty?” he asked.

“You must not support this corrupted government any more. Come election, you must support Pakatan which has promised to restore your rights including the rights of the natives over their ancestral lands.

“The Pakatan will promise to raise the oil royalty to 20%, bring development to the rural areas and raise the people’s standard of living.

“You better repent now and help yourselves to help us in the Pakatan to change the State Government,” he stressed.

Chua’s visit to Sarawak is part of PKR’s preparations for the coming State election that may be called at any time from now until July next year.

The big question is: do we want change? – The Broken Shield

When Chua Jui Meng levels the leaders in the State government are corrupted, there are some truths what he says. For instance, the MACC had recently exposed the Residents and District Officers in Sarawak were under the scrutiny of the commission over the alleged abuse of government project funds of which 6o per cent of the federal funds allocated for Sarawak were `leaked out`.

Chua Jui Meng was a senior minister in BN government before and he knew very well what was going on in the government.

However, the public are anxious to find out the outcome of MACC`s investigation on the `leaked out`. When MACC had exposed the alleged malpractice, it should reveal the results of its investigation, otherwise the public may have different perception on the credibility of the commission.

"“All the young men and women have gone somewhere to earn a living as they cannot work on their lands that have been robbed by the State Government".

There has been so much abuse and corruption that it is impossible for BN to rule properly - thus the saying that the BN will implode.

It's difficult for rural voters to appreciate this and a generation will pass before the PR when it rules, can straighten things out to protect fundamental rights, with good education and health policies. Economic growth can really only be sustainable with these reforms. It's a falsehood to claim otherwise.

Elitists who only believe in their few selves are no better than the propagators of the caste or the "untouchable" curse!

hmm..
those messages should be directed to the Dayaks as they keep voting for the same parties to form the goverment...and they famous mentality, "anang ngelaban pritah" till kingdom come.....

the chinese (chinese, indian and malay in malaya)already make the effort, now the whole of malaysia depend on Dayaks to wake up..