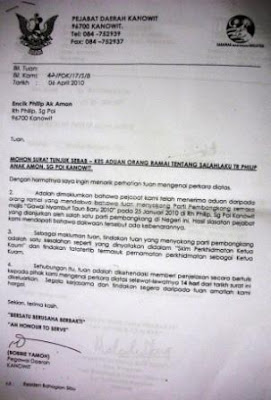 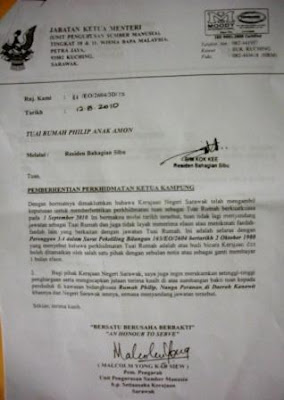 Scores of Tuai Rumahs (longhouse chiefs) and Tua kampungs (village chiefs) have been sacked after they have been found welcoming members of the opposition to their longhouses.

Philip received the letter terminating his service effective 1 September 2010. The letter came from the office of the State Secretary (see attached letters above).

He was first given a show-cause letter following a complaint from supporters of State assemblyman for Machan Gramong Juna.

The show-cause letter dated 6 April was signed by the district officer, Kanowit, Bobbie Yamoh after he received complaints against Tuai Rumah Philip supporting the opposition members during the New Year celebrations on 25 January 2010 at his longhouse.

“According to our investigations, it has been found out by this office that the allegation was true.

“For your information, your action in supporting the opposition party is a serious offence under the Community Leaders Scheme of Service and a disciplinary action including the termination of your service as longhouse chief can be taken against you.

“You are hereby given the opportunity to give an explanation in writing within 14 days from the date of this letter,” said the District Officer.

A similar letter was given to Tuai Rumah Sau, also of Sungai Poi, Kanowit.

A pledge of support signed by 34 heads of families of the longhouse has been sent to the distract officer for his information.

Commenting on this Nicholas Mujah, secretary general of Sarawak Dayak Iban Association (SADIA) said: “Nowadays, warning and disciplinary actions against longhouse chiefs for supporting the opposition are common throughout Sarawak.

“This is particularly so when the general election is coming, but the longhouse chiefs who are elected by the longhouse folk just cannot be bothered.

“Only the longhouse chiefs appointed by the government upon recommendation by their respective assemblymen are scared.

“But the longhouse chiefs who have been elected by the longhouse folk according to Iban Adat (custom) are not afraid to welcome visitors be they from the Pakatan Rakyat or Barisan Nasional as that is their Adat to welcome them.

Since politicians involved in the appointment of community leaders during the state election in 2006, many longhouses are not happy with the government appointees.

Some prefer their own longhouse chiefs who know the customs and traditions.

For example, Abok Pulau Batu longhouse in Sri Aman has two Tuai Rumahs: Tuai Rumah Suri Anak Nyaun was recommended by the State assemblyman for Balai Ringin Snowdan Lawan to be Tuai Rumah; and he has a few families supporting him.

And the other is Tuai Rumah Nyanggau Anak Gerang who has been elected by more than 20 families.

“We have two Tuai Rumahs, one for the government and the other for the rakyat,” said ex-councillor Augustine Mercer.

Mujah accused the government of trying to break the down longhouses into two in order for them to divide and rule the Iban community.

“It is really sad especially when the Ibans themselves are part of this policy,” he added.

Meanwhile, See Chee How, information chief of Sarawak Parti Keadilan Rakyat wants to seek a judicial review against the decision to sack the longhouse chiefs.

“Give me the names of the sacked Tuai Rumah, so that we can apply for a judicial review,” said See, who is a lawyer with Baru Bian Advocates and co. – The Broken Shield.
Posted by Jetty at 11:33 PM

The law of the stone age man. The regulations of the jungle people and the rules of the uncivilized.

They are now after these poor folks. Such dirty tactics show these people are cowards and should be taught a lesson.
The people of these longhouses must stand up to this uncivilized behaviour and must protest in the strongest possible terms.
This shows that Bn is desperate to win and they will play dirty to win this election.The dayaks must unite and show BN that these tactics will cause more votes to go to PR.

A great majority of TR these days will not rely on a mere RM450 /month allowance/salary hand-out by the State treasury which amount to nothing in comparison to what they reaped from the monthly production of palm oil estate.

Most TRs are people comprising of the younger generation whom understand better on what's going within and around the state. They are quite educated lots equipped with mobile phone and ability to surf the internet for latest local news.

Look around in Miri division - outskirt area, most long-houses transformed into a concrete double-storey terrace long-houses from an old wooden long-house and these are none other than new ideas and vision orchestrated by the younger brand of TRs. They are very energetic lots, travel in and out from long-house to town, attending seminars/meetings, cross-meeting session among TRs of the same brand off course in the Kopi-tiam almost on daily basis, exchanging views, ability to analyse government economic policy of check and balance, etc.

These younger group are those hungry for change of government. Damn..! they are ready to vote for a change ... PKR or the "Third Force"...!!

The termination of the tuai rumahs'post from certain tuai rumah only goes to show how desparate are our Iban Ybs to maintain their power.They are only good at victimising their own people but when it comes to fight for their rights,their performance is zero.We even not allowed to talk about hardship and development,as suggested by Mawan.As has been exposed by many of us in the past,our Dayak BN YBs,especially the Ibans,just could not and will never be able to stand for our rights.Instead of helping the community,they became accomplices to Taib's grand plan to disintigrate the Dayaks futher and in the course,weakening the Dayaks bargaining power,as we see today.To all the tuai rumahs whose service has been terminated,i hope you wont bow to the pressure,and when the YBs concerned pass away later,donate another rm.450,in case they had never had enough.

In our Dayak culture, Tuai Rumah are chosen by the longhouse families due to their trust in the TR to lead longhouse in issues and cultural management of the race and welfare of all families coming under their supervision and guidance. Now, TR are chosen and appointed as how committed you are to support BN Sarawak Government and how tame you are to always agree to even unjust influence on your community. If TR are not 'obedient" their longhouses face punishment from Sarawak BN and their respective YBs of the consituencies.

Bloody hell,they just want to shut our mouth. If this gov't is allow to carry on, they will shut our anus also.
Kick out BN and we all won't have to endure this hardship.

If I am not mistaken, the allowance for `tuai rumah` and `ketua kampong` will increase to RM800 per month with effect from 1.1.2011. If that is true, it can be seen as

i) a government`s effort to grip firmly on tuai rumahs so that they always support the government and it is their duties to see that their `anakbiaks` to follow the same.

ii) one of government`s strategy to win the hearts of `tuai rumahs` and `ketua kampongs` in the coming election.

But an intelligent rural voter or a longhouse dweller will not influence by the selfish tuai rumah, because he has the constitutional right to support for any political party of his choice.

Dear Adriene, I have uploaded the scanned letters as per your request.

Let us all pray for the DAYAK."Lord God the Father of Almighty.Lord, this is the dilema that effects the lifehood of we the Dayak Iban in Sarawak nowadays.May we be delivered from all those suffering. We look upon YOU as LORD of Ibraham, Issac and Jacob, and that YOU will also deliver us as you had delivered the people of Israel from Egyptian's bondage. In Jesus's name we pray.Amen"

Can you please upload bigger ones, please. You can "display" small size to fit page.

There is a Lembaga Adat Sarawak or something regulating Dayak Adat. Not the District Office!

BUT! WHY MAJLIS ADAT ISTIADAT, SADIA, DBNA, SDNU, PEJABAT DAERAH ARE KEEPING NUMB AND COWARD ENOUGH TO VOICE OUT, DONT BLAME THE STUPID AND UNEDUCATED TUAI RUMAH OR PENGHULU CONCERN, THEY NEED BACK UP FROM AUTHORITY CONCERN, THE YBs HAVE BYPASS ALL THESE AUTHORITY WHEN COME TO APPOINTMENT OF OUR COMMUNITY LEADERS. ALL IBAN NGOs ARE TO BE BLAME TOO FOR BEING TOO SCARED AND COWERED TO VOICE OR HIGHLIGHT THIS ONGOING PROBLEM. KOMON!! LA!!