We have power: why use the power of the spirits and court? 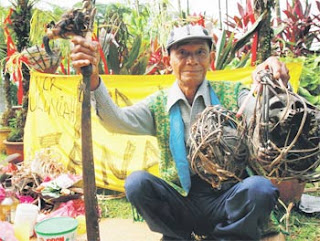 It is a bitter lesson for the people of two longhouses – Rumah Ranggong and Rumah Belili, Sungai Sah, Bintulu Division – to learn for supporting Barisan Nasional candidates in the last parliamentary and state elections. Why a bitter lesson?

It is bitter because, despite their strong support for the Barisan Nasional government, their land of 1,803 hectares are taken away and are given by the BN government under a provisional lease to BLD Resources Sdn Bhd for the planting of oil palm.

At 10.00 a.m. on Thursday morning (4 December) Changgai anak Dali, 84-year old, a third generation resident of the area, was summoned by BLD Resources to appear at the Kuching High Court for “trespassing” into his own land/garden that has been taken over by the company. He claimed he had customary rights over the land which he and his forefathers had farmed for almost a century. The company wanted the Court to stop him from entering the said land.

Changgai was accompanied by 75 others who represented each of the 76 doors of Rumah Ranggong. Their land was also involved. The case was adjourned to 13 January 2009 to allow the company to file an application to include the State government as a party. Harrison Ngau who represented Changgai said several more suits would be filed against the company for trespassing on their NCR land.

Before the start of the case, a miring (ritual) ceremony was held in front of the court. As they could not get help from their elected representatives (MP and State Assemblyman), Changgai and those accompanying him had to seek the assistance of the spirits to help them fight forces bent on taking away their land.

The people of Rumah Ranggong and Rumah Belili were not the only ones who had brought their cases to court, but also people in other parts of Sarawak – from Lawas to Limbang, Bintulu, Miri, Sibu, Sarikei, Kanowit, Simanggang, Simunjan, Serian and Lundu - had also resorted to court to claim back their land.

Whose fault is it? It is your fault, my fault and the fault of the community. We Dayaks can never learn a lesson as election after election we continue to vote BN candidates who have no guts to speak on our behalf.

My salute to him and his men for fighting back defending our grandparents rights. All Dayaks must pray for them and support them in whatever means against the land grabbers.

The Dayak BN YBs have failed miserably to look after the only remaining interests of our Dayaks.If what you said is correct, because none of the YBs from the BN turned up to support them (because of the culture of fear that exists in Sarawak or they are worried whatever Taib has given them will be taken away from them), it is all very sad: The BN YBs want to see their people rot to death.But we must persevere and fight on for change that must come sooner or later.
That change can only be brought about by getting rid of the corrupt BN Sarawak Government in order to get rid of the despicable Taib Mahmud who doesn't care about NCR of the Dayaks.

Use the skulls an cast bad spell on those like Jabu,Taib,Masing,Mawan and all those who are involved in this daylight robbery.
The price they pay so dear for voting BN is clearly seen here.
So to all dayaks,let this be a shinning example for your mistakes in voting these crooks to power.
Traitors must be kick out of sarawak.We must send them packing.
The gov't that we vote must protect us ,but this is clearly not the case.
To those crooks,their skull will be of the same as the ones shown here.Let this be a warning to land snatcher.

I wholeheartedly agree with what Anonymous said regarding the lack of interest of the BN YBs from the Dayak community. They are one bunch of people who are prepared to see their own community perish. So sad.Let's hope when elections come the Dayaks especially Ibans ba rumah panjai will not take RM50 or RM100 and vote again the BN.
Pangka parti PKR,DAP or PAS orSNAP.

If there is a revolution of spiritual consciousness emerging out of the awakening of the Dayak Spirit, we in the "modern world plagued by the disease of corporate crony capitalism" ought to rejoice. We ought to learn what the new dance of the Dayaks mean. No longer will this dance be one exploited for Malaysia's tourist and hospitality industry to showcase "shallow and meaningless Malaysian multiculturalism", but a new dance for a new era grounded in Mother Earth, inspired by the Great Spirit of Dayak Awakening.

Will this dance with the Dayaks displace despotic regimes and dying demagogues? The answer lies in the way the dancers becoming the dance.

What Neil is trying to say is this: We Dayaks must determine on our destiny from now henchforth. Can we switch role? Let them nyepi asai.

Skulls? Bad spells? Veiled threats of violence? Is this what Dayakism is really about? Let's not get carried away with rhetoric (jako bicara). Remember how a violent form of Dayakism has been repeatedly exploited in Kalimantan Barat to the detriment of long-settled Chinese, Chinese-Dayak, and Madurese inhabitants. In my view the unjust taking over of land rights such as in this case of Rumah Ranggong and Rumah Belili has to be countered by political and legal action in the name of a multiracial "politics of social justice", not a reversion to racial stereotypes, emotional outbursts, and hints of violence. SKY's current comment in Malaysiakini is relevant here.

In case there's any confusion, my comments above refer to Neil's first post.