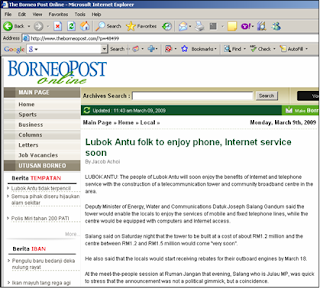 Source: http://www.theborneopost.com/?p=48499
Even though the nomination day for the Batang Ai by-election is some three weeks away, 'goodies' from the Barisan Nasional (BN) have started to be offered to the voters of the constituency.

The first to bring development projects to the constituency is Deputy Minister of Energy, Water and Communications Joseph Salang, who is Information Chief of Parti Rakyat Sarawak (PRS), when he announced that some RM40.2 million worth of communications services and facilities were to be built “very soon” in Lubok Antu (see The Borneo Post, 9 March 2009, front page).

The projects include a tower worth RM1.2 million and communications centre worth between RM1.2 million and RM1.5 million to be built in Lubok Antu so that the people would soon enjoy the benefits of internet and telephone services.

Salang who was addressing villagers of Rumah Jangan last Saturday also indicated that as from 18 March 2009 the people would receive rebates for their outboard engines.

Mark my word, the voters of Batang Ai are sure to enjoy the biggest durian “runtoh” never seen in the more than 45 years that Lubok Antu has been part and parcel of the Malaysian Federation. With these dangling carrots in front of their eyes, the voters nevertheless, must play smart.

The amount of durian “runtoh” will make people from other constituencies envious and how they wish their elected representatives to resign or die in office so that by-elections can be held.

However, smart voters will accept the money and the goodies, but will vote for the Opposition candidate; even donating some of BN money (read taxpayers’ money) is a worthy cause in our struggle to have CHANGE IN THE GOVERNMENT as well as to defend our rights and our future. This is what Dr. John Brian has been advocating in his Dayak Baru blog (http://dayakbaru.com/weblog08) where he wants total commitment from all of us towards this change by donating RM5.00 to the Batang Ai by-election.

Although the Courts have declared that promises of development projects are allowed during election times, are we not promoting and perpetuating a system of corrupted democracy where everyone is involved right from the voters to the highest people in the country? Is this system good for the country? – The Broken Shield

A strange phenomeno that only when there is a by-election "durian rontoh". Its dangerous to be YB cos anytime the dagger if after you
to force by-election.

JT, i'm just an ordinary person, no degree, no diploma just a certificate...to me what LA/BA ppl want is good road, enjoy good electricity & clean water system...internet??? is that most important right now??? so stupid if ppl there vote BN just because they can acces internet..? why BN want to waste money@tax payer money aka our money kena ngaga utai ke enda penting diatu??? because their talibarut can get the project to erect the pole/telecom tower..

well,can't deny that it is a durian runtuh for the community..big goodies...hehhehe..HOWEVER..just like Royal Aup said that's not the most important thing Btg Ai people need..it seems to me..BN has no idea what the people of Btg Ai need most..should we call them stupid or what?

Akai! Its a blessing in disguise afterall with the passing on of the last YB in Lubok Antu. Lets hope that more YBs in the rural and poor areas drop dead like rotten durians in the next few months. We love BN windfalls when each YB drop dead. We can't wait for more "Durian Runtoh" to come our way.
By the way, maybe this Salang would like to enlighten us as to how to access the internet when we can't even afford food on the table what more a computer. Where are his priorities? How arrogant can one get.


its more like euphemism for getting screwed all over again???

hope dayaks in btg ai are not simple folks that cannot be educated about the importance of people's power.

No problem at all, it has been a tradition of BN to give out `ampau`to the voters in the past, but still they lost in some areas.The rural voters are matured enough to decide.

I agree with Royal Aup:Basic necessities and amenities are what the Iban longhouse people in Lubok Antu want, and to keep their NCR land and not for Taib and his Ministers to steal from them

Do give priority to ability to work and service the rakyat, above all seniority in the party," said Vicker Andrew Enting, PRS Batang Ai Youth Chief.

He said they will accept whatever the party leadership decision, but would prefer a local political "true-blue" that go through thick and thin rather than parachute so-called "professional".

BN is having an unwritten laws of fielding highly qualified candidate with at least a Bachelor degree or above benchmark.

In fact, another private secretary named "NELSON", the soft spoken Nelson Balan Rining took over from his boss, Datuk Judson Tagal, who also died in tour of duty.

We are very disappointed that Naga Alam is being sidelined in favour of parachute candidate Mussen Lumoh.

The PR should keep telling the people of Batang Ai to accept whatever the BN offer them because it's a gift from the people and because Taib fear the opposition. And if they want more goodies, the only way to get them is to bring in the opposition so that come the next election, BN will even pump more money and goodies for them. Play the phycological war.

I still hope PKR can win

My other blog is still on a trial run basis..I need some time to sort things out as this blog is getting heavy traffic by the day..

As of now, please continue to visit my current blog >> http://thebrokenshield.blogspot.com

I will make the announcement should I move to the new blog address.

Thank you for your support.

JT/Dayakbaru, what's the fuss all about?

Why suddenly our Blogger friend Sarawak Headhunter and Dominique Ng goes for each other throat, with Dayakbaru trying to stop the fire but get himself elbowed instead and USA trying his best to pour water but got kerosene instead by claiming Sarawak Headhunter is under BN payroll which the later denied? Tiyung Dayak may now play the role of mediator but Uchu Keling insists that best man win while Borneo Warrior is watching from sideline and clapping hands but poor me is driving down on dusty road to Batang Ai trying to calm down our supporters... I hope I will not fail but if I do I'll get screwed,. But Please lah Dayak nation don't announce on TV yet until Bawin or Jawah clarify.

I'm nobody; I just play it “small”, as I’m apolitical. Of course, I’m with the Non-BN camp and I’ll contribute whatever is necessary via online. You might not get me “in real life” and so do I, right!?

Well, I assume that others and I – the bloggers – are following RPK’s stand on blogging. We really want to continue with our “easy” life…

Hopefully the fuss will be over… Let’s focus on our common battle for the time being; we’ll discuss the “disputes” later on.

Lots of smuggle tiger beer are on the way up to Batang Ai to drunk the dayaks.This is one one way to please these rural dayaks.Only way is to intoxicated their simple mind and make them vote the satan.
So let not be fool by them.Kick the dictator out and vote PKR.