Selection of Mussen: what transpired behind the scene? 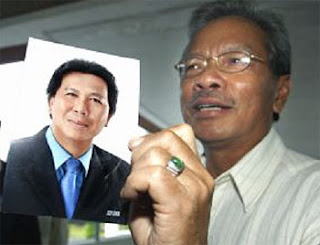 PRS president Datuk Seri James Jemut Masing holding a photograph of
Malcolm Mussen anak Lamoh, who is BN Sarawak's choice for
the Batang Ai state by-election. - Picture by NIK HARIFF HASSAN
Picture credit: http://www.nst.com.my
Now it is finally known that Malcolm Mussen is the BN candidate for the Batang Ai by-election. Apart from Mussen, the man who is very happy is the President of Parti Rakyat (PRS) James Masing who really fights for Mussen to be his party’s candidate.

Although Mussen’s selection appeared to be unanimous, yet no one knows what transpired behind the scene. Even when Masing entered the meeting room he was not so sure whether his nomination might be accepted as there were names nominated, one by Deputy Chief Minister and deputy president of Parti Pesaka Bumiputera Bersatu (PBB), Alfred Jabu anak Numpang and the other by Donald Lawan, a businessman with a strong PBB connection. The Chief Minister Abdul Taib Mahmud admitted he had received a number of names for consideration by the Barisan Nasional.

According to Masing, only Mussen’s name was discussed. And during the meeting, Jabu was unusually quiet; normally he was very critical and vocal. Even at the end of the meeting, Chief Minister noticed that Jabu was very quiet and he was heard to have commented: “Fred manah meeting sehari tu nadai maioh jaku” (Fred, it is good to have a meeting today with little discussions).

Jabu’s unusual quietness puzzled BN members at the meeting. Was Jabu unhappy because his “manok sabong” could not fight? Or did the chief minister tell him off and not to disturb Masing’s candidate? - The Broken Shield

Good morning!!! I have to correct some of the factual errors here. First and foremost, Donald Lawan initially wanted to have a say in the selection of candidate but decided against it, as he did not want to cross sword with Jabu again. Masing submitted ONE name last week - Naga Alam - but that was rejected by CM. Mussen was Jabu's choice all along, and there was an 'agreement' between him and Masing that if Mussen is nominated, funding will be from PBB and that he (Jabu)will try to put Masing in the good book of CM again (why James is not in the good book now will be another story, another day.) So, there's no reason for Jabu to oppose Mussen's nomination at that meeting. Come by election day, ask around, who holds the money and that will be Jabu. Masing will ofcourse be the director of operation but that's only title kosong.

Taib must have been told of the feeling on the ground. Give in to Masing's choice or lose Batang Ai. Batang Ai is one battle that Taib is not confident to win.

Jabu was not very happy becos this man is not his crony.Jabu knows too well that if he put in any of his cronies, then that candidate will be sabotaged by Jabu's group.
But whoever BN put in,the battle line is drawn.PKR must now work very hard to 'finish' this man before he get to stand up.
The dayaks must be united for change and BN must be thrown out.

So marvellous Jetty! You could hear what Taib whispered to Jabu in BN closed door meeting. You have a good `listening post` inside.

WE THE VOTER AT BA WILL REJECT THEM!!!

MANY OF THE BN SUPPORTERS ALSO WILL "SABONG PAHI" THIS COMMING BY ELECTION (BA).

CHANGE WE MUST. VOTE FOR PKR.

Whatever it is, the Dayak is still on the losing end. Why because a highly qualified Dayak like Mussen should stay in the Civil Service till is retirement because he is of the "Director" material.

BN will be very happy to see one senoir civil servant vacated their seat inorder to promote another Melanau or Malay to that position.

Lubok Antu folks is once again being fool by Masing. An effective politicians need good team work in the civil service to realise is planning and I am sure the farmers and the agriculturist neede people like Mussen in Agriculture Department.Now since the candidate is not a politician and I think is wise for we Dayak in Lubok Antu to just forget about him and throw our support to PKR IBAN Candidate.

I don't what has happened to Masing's very own hard core supporters like Edmund Sating, the most suitable candidate for PRS in Batang Ai? Had Edmund satng being 'anak-tiri' again by Masing. Or had Masing's own list of candidates for Batang Ai being shoot-down again by Jabu & Taib? Could this Mussen guy be the bitter-pill that Masing has to swallow again? Remember Masir and Nyallau the fathom PRS members were being put forward by Jabu & Taib. Nobody has ever heard of Mussen in PRS line-up. Could he be another Masir or Nyallau again? Come on Masing, you couldn't fooled your very own people again. If you are thinking of PRS only then you are dead wrong, this could creat further crack in PRS itself. A crack waiting to be crumbling down.
Nobody in PRS knows Mussen as much as they know about Masir or Nyallau. What is happening to Masing now? And what is happening to PRS?

The Batang Ai By Election is between the BN and PKR.
People will decide whether they want BN to continue or they wantchange , that is elect the Opposition.

If that is the rural trend then BN will be in trouble in the next State Elections.

Thereforethey must choose wisely whothey want as theircandidate - it must be someone that the majority of the Iban in Batang Ai favour to be their manok sabong.

Why nominate Malcom? Win or lose one Director material from Dayak-Iban in Civil Service sacrificed.

There are many ways to contribute to society - Private sectors (such as bankers, lawyers, engineers, architects, etc), in Civil Service (senior decision-making role as directors - Land & Survey, JKR, Education, etc) and in Politics.

Joe Fernandez,
Can you stop copying articles written by other writers and turn them into yours?
Very glaring example is the one written by Jetty on what transpired at the BN meeting.
But of course you have resorted to copying because you cant even enter Sarawak. We understand that. Shame on you.

Masing is a happy man right now! I'm sure that the candidate is a PBB "planted mole".

I don't buy it whenever I saw a BIG smile on Masing's lovely face.

Jabu what?! Was he so quiet during the meeting with the reporters?! He must be "acting" at that time, I guess!

Anyway, I'm glad that Masing have put "another blame" on bloggers... Let him ignore us the bloggers for this moment. The day will come for you Masing, yeah, one day... another day... during the next state election!

Batang Ai is just a litmus/acid test, remember?! Count your $O$ from now on...

Mussen Mussen poor you. You got the brain but your are an opportunist.And thus you dont see your greater prospect in your Department for further advancement. You could be a head of the Department someday but you are giving way to others, dont you see that?
You say that you can serve people more as a politican. To me, you are going to serve more to your own pocket, yhat is what you are thinking now. Just be logical and dont expect people to be that stupid. As a senior officer with the important Department, dont you see your service there is more servicable to your own people than you are as a politician?
Projek mee segera ha ha ha, how i wish more PKR representatives steppiing down so that more maggie mee projeks for the rakyat, how nice it is going to be rite? Actually najib is worried more PKR step down and more mee segera thus emptied the coffers at this very very critical economic downturn. That is why he is saying no more mee segera projeks, BUT lets see after this.

“Of course, Sng is a problem just as he has been in the other parties where he has been involved. Jawah has to distance himself from Sng for his own good and that of the party. We are not a party to collect projects,” said Kitingan.

Of Sng Chee Hua you said it loud and clear. DSAI and your goodself surely know his roles in muddling with Sabah politics .....

If PKR leadership is really sincere about developing good and credible and trustworthy leadership, any current and future leader irrespective of ethnicity MUST be uprooted.