Like in any other longhouses, Tuai Rumah Ambau, while welcoming the two deputy ministers, called on his people not to vote for the BN candidate and told them why.

Several people tried to stop him talking, but he continued talking and repeated what he said “don’t vote for BN candidate.” The two deputy ministers were clearly not amused, but strong supporters of BN were stunned.

Others (perhaps PKR supporters) smiled. Even if the Tuai Rumah did not make a genuine mistake, the damage has been done.

According to a Bernama report dated 28 March, it said that “so far Mussen has been silent observer at the numerous meet-the-people sessions, preferring to leave it to deputy chief minister Afred Jabu anak Numpang, who was constantly with him, to speak his mind on why the Ibans, who are the majority voters (98%) and in Sarawak, should keep faith and confidence with BN”.

So if this is the person who is going to be YB for Batang Ai, then there is no hope for development to come to this constituency. He does not speak, nor says anything that he wants to do as an elected representative. In the end the people of this constituency will lose.

Should we vote for this type of candidate? Why ask Jabu to speak on his behalf?


3. Only Ibans can change Sarawak’s politics

It was up to them, he said, if they wanted to change Sarawak’s politics. “It must begin from the Batang Ai,” he said and urged them to vote for Jawah Gerang, the PKR candidate.

UPDATES ON BATANG AI- BY ELECTION ~ TAKEN FROM MALAYSIAKINI 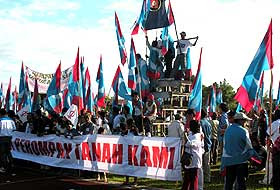 11.20am: In Batang Ai, the returning officer has confirmed that the Sarawak state seat will see a straight fight between Malcolm Mussen Lamoh (PRS) and Jawah Gerang (PKR).

10.43am: In Batang Ai, an objection has been lodged against Malcolm Mussen Lamoh (PRS) candidacy. PKR leader Dominique Ng is questioning the BN candidate on whether he has indeed resigned from his job as district officer. He also said independent Johnny Chuat withdrew at the last minute and pledged his support to the PKR candidate.

10.05am: In Batang Ai, the huge crowd of 15,000 is anxiously awaiting the official confirmation of their respective candidates. Only two candidates have filed their nomination papers - Malcolm Mussen Lamoh (PRS) and Jawah Gerang (PKR).

10am: NOMINATIONS CLOSE. OBJECTION PERIOD (10 to 11am)
Two candidates have filed nomination papers in Batang Ai.

9.17am: In Batang Ai, PKR candidate Jawah Gerang, accompanied by Selangor Menteri Besar Khalid Ibrahim and thousands of supporters, arrived at the nomination center at 8.40am.
Minutes later they were joined by PRS candidate Malcolm Mussen Lamoh and top BN leaders including Sarawak Chief Minister Abdul Taib Mahmud, Deputy Chief Minister George Chan and PRS leader James Masing. They marched to the indoor stadium from the BN operations centre about 2km away. Taib was said to have flown to Lubok Antu by helicopter.
The crowd gathering in a open field outside the Lubok Antu sports complex has swelled to about 10,000 with BN supporters outnumbering Pakatan.

8.45am: In Batang Ai, about 5,000 supporters for the candidates have gathered at the indoor stadium in Lubok Antu, a border town in the Sarawak state seat.While the focus of the battle will be between BN's Malcolm Mussen Lamoh, who is from PRS, and PKR’s Jawah Gerang, an independent candidate may throw his hat into the ring. It is learned that Johnny Chuat, 38, an oil and gas executive and a publisher of an Iban magazine, will be handing in his nomination forms this morning.

8.40am: Nominations for the Batang Ai, Bukit Gantang and Bukit Selambau by-elections began promptly at 8am today.
Posted by Jetty at 2:55 PM

If Tuai Rumah Ambau can be a true sarawakian,I hope more will follow his footsteps.

YES! Sarawakians! You can do it!
Start a political tsunami in East Malaysia. Stand up and speak out like Tuai Rumah Ambau did! Take back what belongs to your ancestors, you and your children!

So, Malcolm, is on a leash, muzzle and led alone the campaign trial by Jabu? To add further insult he is another one of the many loanees from PBB and make to wear the PRS suit? Therefore, we can conclude that PRS is no longer relevant because its a party licking the boots of PBB. Now has PBB fought for the interests of the Ibans? No!, instead they stole our NCR lands to enrich a few and make the rest of us squatters on the lands of our forefather. Dayak Ybs by numbers are the majority in Sarawak, yet they fail to see the land issue. They chose to betray us and stoop so low to be ball- polishers. Together we shall overcome their treachery. Lets unite and give Jawah the mandate to carry the torch of change not only for Batang Ai, but for the whole of Sarawak! Batang Ai shall make history for the sake of our further generations.....