It is nothing surprised about Najib Tun Razak’s cabinet announced this afternoon. While Sabah is given a better deal, Sarawak remains the same with two (2) ministers and eight (8) deputy ministers.

We were hoping that one Dayak from either Parti Rakyat Sarawak (PRS) or Sarawak Progressive Party (SPDP) should have been appointed to represent the Dayak community in the cabinet proper. The four deputy ministers – Joseph Salang (Information, culture, arts and communication), Jelaing Mersat (home ministry), Joseph Entulu (rural development and territories) and Jacob Sagan (international trade and industry) – are outside the cabinet and do not attend cabinet meetings. Who are going to articulate our interests?

It is true that Douglas Uggah Embas has been retained as a minister, but he is more representative of PBB’s interests than the Dayaks’ interests.

Once again the Dayak community has been let down both by the former Prime Minister Abdullah Ahmad Badawi and the newly appointed Prime Minister Najib.

Chief Minister Abdul Taib Mahmud was reported to have said that there would be surprises for Sarawak. Now you know what surprise is there?


2. The picture tells the story

The picture of page 6 of The Borneo Post today (9 April) tells the story how happy were PBB boys with the electoral victory of Malcolm Mussen Lamoh on the Batang Ai by-election on 7 April. 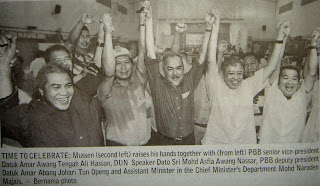 Although Mussen was nominated by PRS to contest the Batang Ai by-election, there were no signs of PRS people celebrating his victory. The questions being asked are: Where were the PRS people? And why PBB people were seen celebrating the victory? Does this mean anything to the readers?


3. Time for BN to deliver the goods

After the by-election is over, the Barisan Nasional candidate, Malcolm Mussen Lamoh has won the by-election. His victory was achieved because of the promises made the Barisan to the people of Batang Ai. The promises to tar-seal the roads leading to their longhouses, the construction of a new road, the construction of communications and internet towers and centre, to pay the unpaid claims of properties as a result of the Batang Ai Dam, to give them an extra land for farming, to give them titles to their land and to supply them with electricity and water supply. The BN also must keep its promises to give RM1,000 more if their candidate won the by-election. RM500 had already been given.

The Ibans in the Batang Ai have been loyal to the Barisan and it is expected that the BN will be honouring their promises. However, the people and Parti Keadilan Rakyat are monitoring the fulfillment of these promises. The next state election is actually around the corner and the same issues will be raised again.

Parti Bersatu Sabah (PBS) wants the ethnic races of Sabah to be known as Bumiputra Sabah and not “other races” in the federal government affairs and forms.

As Dayaks have no political party of their own, there is no one daring to speak on the interests of the Dayaks. Like PBS, our Dayak YBs should ask the federal government to recognize Dayaks as Dayaks and the word “Dayaks” should be written in the official forms and the federal government affairs instead of “lain-lain” (others).

The categories of races in most forms listed major races as the Malays, Indians, Chinese and other races.

There were occasions when Dayaks are not considered as Bumiputras and are therefore not entitled to privileges given to Bumiputras.- The Broken Shield

Khairy Should Be In The New Cabinet

Sad, our dayak Bidayuh has no representative in the cabinet line up.May be Najib is satisfied that the RM4 million he had given to Bidayuh community was more than enough.

Secondly, George Chan might not explained in details to Najib why the Bidayuh should be given with a federal ministerial post.

Khairy Jamaludin will be most respectful and honour if he joins PKR. Najib still gets an advice from Mahathir to run the country.

re para 2 - The picture tells the story.
This is a proof that Mussen Lamoh is the PBB man not PRS.

At least the Sabahan government has the guts to fight for what they deem is a shortcoming but ours are more interested in self preservation and self praises and ego trips.Compare the development in Sabah and Sarawak and it is obvious who has done more for the people and state.Lets not talk about corruption even.
Our people could have proven a point in Batang Ai but let the chance pass.
I suppose they will reap what they sow and not whine about anything later.One bright spark as I heard is that the young voters are now awakened and hopefully will change the mindset of the aged docile generation soon.

The great fact is that ex-PM Mat Tir is back in action and Na Jis just another toy in his (Mat Tir) hands....Congratulation Malaysian - One Malaysian

My Dear Dr George Chan,
can you please stop lying to Richard Riot and the Bidayuh people?
You said you were disappointed that Richard was not appointed as deputy minister. Stop blame Najib, you numbskull. You know very well that SUPP's quota is one minister and two deputy ministers. If you want Richard to be in, you dont recommend Robert Lau or Yong Khoon Seng as deputy ministers, but Richard. Drop either Lau or Yong, surely Richard will be in.
Idiot people always blame others for their stupidity.

I refer to a statement issued by the election commission as reported in the Borneo Post on 10.4.09 under the captioned " Every ballot box accounted for." The statement said, "The ballot boxes are transported to tallying centre under the care of two police officers, the supervisor and two polling clerks."

From my experience, no police police officer is allowed to carry a ballot box after voting.His duty is only to escort.No ballot box will be kept in a police station, unless due emergency only.

What does the election commission means by " under the care of two police officers."

Najib don't have sarawk in his mind.sarawak after all is just nothing but only a 'safe fixed deposit'.He can use anytime he wants .Even Taib son didn't get a good post.sarawak only get 3rd class post.

The unique of 4 dayak Dy. Ministers are their names which begin with letter "J", for sure they are colleagues of "Jabu" and "James".

They should take "Johnical" fast to their fold, and for those whose name begins with letter "J" try your luck in politics.

Congrats to Najib for his new cabinet. Its actually a good cabinet. I don't know why everyone do not like it. Its good because it will make PR win more seats. Still give minister post to loser parties. Those that deliver get 2nd and 3rd class seats. By right 70% of ministers should be from Sabah and Sarawak.

Khairy still not make any news about himself not getting any post. What a slap to his face. Wanita chief got post. Putri chief got post. The loser Mukhriz got post. Even Khairy's deputy got post. How to show your face anymore?

I do not agree to Khairy joining PR. He can do more damage in BN.

And the best slap of all is to our Yang Di Kasihi, Pehin and Sarawak as we all got lousy post. Sabah tapau all the 2nd class post.

I was suprised. Taib visited Najis first but got the last choice post. I thought he wanted his son to be full minister, Douglas come home to take over Jabu's place. Jabu become senator together with our future CM Affendi with the beautiful Tiara. But i guess Najis give Taib no face.

So Georgie boy is angry? Which basically means Taib is unhappy. Got a nasty suprise then...hahaha...I wonder whether the next State election he will go all out to win the seats. Maybe he want to teach Najib a lesson..who knows...hahaha...and how to drop Robert Lau and Yong Khoon Seng? If drop Robert Lau...the Foochow will revolt and no new public toilets. If drop Yong Khoon Seng, there will be nobody to officiate beauty parlors, massage place and eat Golden Arch laksa...hahaha..useless bunch...do everything but their job

James Masing should stop trying to stop blogs...Its like trying to stop the tide from coming in. The reason he don't know about blogs cause his kids all too young to educate him about ir. Maklumlah selalu tukar isteri..sik sempat anaknya membesar...

Why scared of blogs? If you do your job then you shouldn't be scared. If don't do plus your character is lousy then sure you scared aka Jabu and James aka Dumb and Dumber.

Robert Lau is the unofficial head Taiko of all the Sibu Foochow in Central Sarawak, where this group exclusively and actively participates and controls key areas in our economy, i.e; Banking, Agriculture, Logging, Commerce, Shipping, etc, etc, etc, and who the hell is this Richard Riot fella??? What does he bring to this equation??? What wealth can he speak of??? Tell you what, you're lucky the BN doesn't select someone other than Richard Riot to represent your kawasan. You must be stupid. SUPP is a Chinese Party, it is a privilege for you to be there.