Several scores of voters who are working in the cities, towns and in Peninsula Malaysia are returning today to Batang Ai to cast their votes for tomorrow’s by-election. Many are going on their own transport, but some are using buses already arranged for them by both the Barisan Nasional and Parti Keadilan Rakyat. 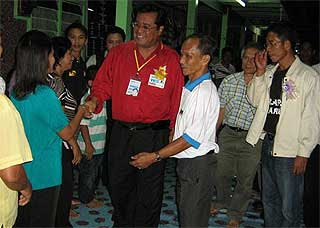 PKR hopes that these working voters who are more knowledgeable in issues being discussed regarding NCR land, unpaid claims and lack of development, muddy roads, lack of electricity and clean water supply, may be able to influence their parents, uncles, aunties and their siblings to vote for PKR candidate, Jawah Gerang.

PKR also hopes that pensioners should help by telling their relatives that the BN government is not fair to Ibans in terms of recruitment into the civil service and in promotions, entry into universities and scholarships, etc.

Unless the aged voters or the longhouse voters are told about all these, they may not understand about these issues and are confused by the promises of development and financial assistance.

In The Borneo Post today, PRS president James Masing questioned the fairness of the election watchdog Malaysians for free and fair election in its coverage of the by-election in Batang Ai. Its interim report recently only covered the supposed wrong doings of Barisan Nasional and not the opposition.

Masing said that Mafrel should have reported the incidences of the opposition tearing down and vandalizing BN posters. One billboard at the junction leading to the Batang Ai hydro-electric dam was vandalized and a police report had been lodged over the matter.

He regretted that Mafrel did not seem to bother about the incident apparently because they were more focus on reporting the bad side of BN.

Peter John Jaban, Mafrel chief, today said that nobody reported the matter to him. However, when they found out, they had taken photograph of the vandalized billboard.

Peter said: “For information of the public, we have not submitted any report on the by-election. The game is not over yet. How can he say we are unfair?

“He must have seen reports done by other people. Certainly not our report,” he said and pointed out that Mafrel also covered functions carried out by PKR.

Following reports of Ting Ling Kiew, deputy president of SNAP and Ambrose Labang and three other PKR leaders joining BN, the BN rating for the Batang Ai goes up in a similar fashion when Dr. Mahathir rejoins UMNO the rating of BN in Bukit Selambau and Bukit Gantang also goes up. This assessment is done by BN leaders.

According to PKR sources, “Manok Labang” who has so many baggages attached to him is more a liability than an asset. He has no “tuah, only tuah chelaka”. When the other fighting cock dies, this "Manok Labang" runs away.

In the Iban culture, when a fighting cock runs away when its opponent is dying, it is known as that fighting cock having “tuah chelaka”.

Voters in Batang Ai have been advised not to be taken in by the contents of the pamphlets and CDs which contained negative elements, said Awang Tengah Ali Hassan, second minister of planning and resource management and a senior vice president of PBB. 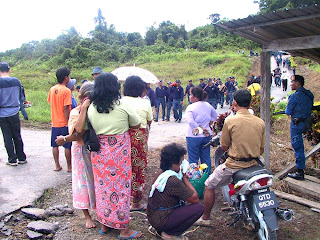 It is true that PKR and NGOs have been distributing thousands of pamphlets and CDs to all the longhouses detailing how land and survey department staff which is under Awang Tengah’s ministry destroyed Iban longhouses allegedly built on State land, how oil palm companies have chased Ibans away from their NCR land and have destroyed their cash crops, their pepper, rubber and fruit tree gardens. All these are being put into CDs and are distributed free of charge.

The strategy by PKR to distribute the CDs and pamphlets must be very effective so much so that the second most powerful minister has to advise the people not to be taken in by the contents.

According to reports received by The Broken Shield many of those who have seen the CDs were seen crying.

P/S: I will be going to Batang Ai to today (6 April) to cover the by-election and will only be back to Kuching late evening of 7 April. To all voters the of Batang Ai, I wish you good luck and success.

im dont know what video were in the vcd that they distributed in batang ai... but watching this video in youtube made me cry..

this video is about about An Iban community in bintulu describes ten years of struggle to protect ancestral rainforests, which led to a landmark court victory in 2001, now threatened.

I have been following your coverage and look forward to further news.

Ambrose Labang is linked to Hii Yit Fong, ex-DAP of Perak, same katoon and same kind. Do not worry about them and the earlier these crabs leave PR-PKR the better it would be

Awang Tanah only dares to talk. Why not talk legal action if this land robber thinks that he is clean?

I advice James Masing to come over to the police to assist them in their investigation on vandalizing BN billboard.

I hope he did not accuse PKR`s supporters of doing it. Anybody can be a suspect of this mischief, including of those from BN.

Awang Tanah is really in a dilemma right now, whether he regrets it or not with the “LCDA” thing!

Of course he would regret it in the future, but then, there’s no point of return!

Still the fate of the dayaks lie in their hands.They are the ones who will suffer if they voted BN.
If the dayaks from outstation returns with a heart for change ,then they will see light at the end of the tunnel.
I hope tonite the dayaks will see victory.God bless the dayaks!
Vote PKR for change!

If we are to read in newspapers, hear from radio or TV, most of the news are very much heavy on BN side.

Anyway, everybody knows who controlled those media. So get good news from newspaper, radio and TV about oppositions like PKR is definitely out. Definitely you will have all the bad news about opposition.

Now most of the peoples do not believe by whatever is written in the papers, radio and TV about the opposition.

Never mind, time change and people change, too. The people now are more aware and uptodate about what is going on around.

The truth is always out there.

tO all calon BN..