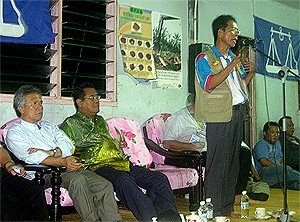 Lubok Antu PKR division will form a special committee tomorrow to keep track on development projects promised by the BN during the Batang Ai by-election.

The committee will be formed when Jawah Gerang, the defeated PKR candidate, holds a ‘thank you’ event at his longhouse in Sayat, Lubok Antu.

"This committee will monitor the projects and ensure that the BN keeps its promises to the people,” Jawah said today.BN leaders have promised about RM200 million worth of projects during the by-election.
The projects include RM2 million for the upgrading of longhouses, RM6 million for electrification programme, RM2.5 million for a telecommunication tower and community broadband centre, RM40.2 million for Universal Service Provision projects, R420,000 for minor rural projects, RM62 million for tar-sealing the seven-kilometer Lemanak Road, the survey and design of Lemanak-Engkari Road, and tar-sealing the 10km ring road in Batang Ai.
Apart from these projects, the government has also promised to settle unpaid claims as a result of the construction of Batang Ai hydro-electric dam and to issue land titles to the land owners.
Jawah said the Batang Ai people have been waiting for these promises to be fulfilled for the last 27 years.

This committee, he said, would ensure that these promises are fulfilled and projects delivered as soon as possible, otherwise the same promises and projects would be made again in the coming state election, expected in two years.


'We must work harder'
Jawah also pacified his supporters, asking them not to be disappointed with his defeat. “Instead, we should regroup and re-evaluate as this was the beginning of an interesting journey towards the Dewan Undangan Negeri 2011 when the state election will be called."We may lose the battle of Batang Ai, but not our spirit and our struggle," he said, adding that the recent defeat should spur them to work harder.
The five-term Lubok Antu MP lost to BN’s Malcolm Mussen Lamoh by a majority of 1854 votes. Jawah managed to secure only 2053 votes against his rival’s 3907 votes.Meanwhile, Mussen 49 will be sworn in as a member of the state legislative assembly when it sits on May 11.
The former engineer with the Sarawak Department of Agriculture is seen as a potential leader who will be able to further strengthen the position of Parti Rakyat Sarawak (PRS) in the BN.Mussen was the only candidate put up by PRS president James Masing for consideration by the BN top leadership.
The risk he took in fielding a political greenhorn paid off.Lately, PRS was seen as a party that has been bullied by Parti Pesaka Bumiputra Bersatu due to its weak leadership.
Posted by Jetty at 12:02 AM

"...It was reported in Malaysia News Network that Jawah asured PKR that he would win the by-election. That should he lose, he would SLIT his throat. Now that he lost, WILL HE?? That sort of gesture is typical of Iban-character-trait -COCK-SURE and boasting..." QUOTED

ONE LESSONS:
Be careful when throwing words at others.Least we'll be judged by what we say OR EAT OUR OWN WORDS.

GOOD AND GREAT IDEA so that BN have to pour out all their money to fulfil the project promises...otherwise next election for DUN, things will be greatly different when every BN man are taking care of his own area.

I am glad the longhouse folks have so much to gain now...and with PKR to help also it makes things even better. that's one of the purposes of having a strong opposition - keep the government in check!!

PKR must start the ground work now.Now till the 13th general election,PKR must convince the dayaks that BN is a corrupted party that only talk crap and bullshit.

I am glad PKR has decided to fulfill its role as a responsible Opposition by monitoring the various promises made by BN during the campaign. Let this be an example to the people of Sarawak why a good Opposition is vital in a true democracy. I look forward to Broken Shield publishing in this blog the list of projects promised and ticking each off as and when it is is implemented. As you, PKR, monitor the govt. we, the rakyat, will be monitoring you. Make sure you are the champions of the rural cause and don't let BN walk away from their promises.

PKR and Jawah were doing the people of Btg Ai a great favour. In just within two weeks, at least RM70 million, was being promised. In the past, requests after requess and appeals after appeals were made to the BN government for development fund to be channeled to Btg Ai and Lubok Antu, but nothing much came.
if Dublin had not died (may he rest in peace) for a by-election to be held, then the RM70 million would not have been promised.
Hopefully, the BN YBs of those poor and underdeveloped rural constituencies should consider resigning from their seats if they trully love their people, so that by-elections could be held and more funds would be pledged.

Frankly, I don't know what's with you people!

If 70.0 million was allocated, 69 will go to the cronies. Who will stop them? They've screwed up Parliament, the Judiciary and everything else.

The correct message must be in the event that created the bye election for Batang Ai! The death of BN is the future life of the rakyat!

THE NET FINANCIAL WINNER IS THE FAMOUS GAMBLER ... starting on the nomination day,
Reportedly he placed his bets on the candidacy of Jawah Gerang.

The Prime Minister's so-called prerogative powers are subject to the recommendation of the party chiefs in BN component parties.

All Bidayuh, Orang Ulu and Melanau should get out from the semi-literate Iban-dominated political parties where they are taken for granted and treated like small boys.

The slave-mentality - they call this loyalty -- Ibans will always take the langkau, babi and ringgit from Taib and vote for him when they are not too busy screwing their daughters. Most Iban in the rural areas are guilty of incest but no one does anything about it.