All money goes to Mukah 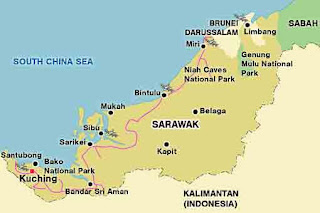 Chief Minister Abdul Taib Mahmud has announced that works on the new Mukah Airport worth RM200 million are to start immediately. The money is part of the RM2 billion given by the federal government for various development projects under the nine Malaysia plan (9MP).

Sited between Mukah and Oya, the airport once completed is one that can be used by Boeing 737.

Taib was speaking at the earth-breaking ceremony for the new government complex at Service Road which is to be built adjacent to the Pehin Palace – Wisma Pehin Setia Raja which was built for hundreds of million ringgit.

But what about the coal-driven power station costing about RM800 million? And why using coal when we are building 12 dams to supply electricity? (There are plenty of coal deposits in Nanga Merit, Kapit. But who benefit?)

According to Taib, the government needs at least RM60 billion to develop Sarawak Corridor of Renewal Energy (SCORE). But the amount is small, he said, compared to the more than RM300 billion worth of foreign and private investments.

All the money given by the federal government goes to Mukah leaving none for other divisions such as Kapit which needs a trunk road very badly and urgently. Kapit people have been waiting for 45 years for the road to be constructed linking the town with other towns such as Song, Kanowit, Sibu, Sarikei and so on.

Don’t you think Kapit should also be given priority? - The Broken Shield
Posted by Jetty at 1:12 AM

This money MUST be share equally between all states in Sarawak and not to the whims and fancy of Taib.He must show fairness is this distribution.
Most of this mosey are given to projects that benefited his cronies companies and those link to his own.
We have seen almost all the big projects been given to all these companies.Ask any contractor around and they will speak with a forked tongue about how they try but were never given any opportunity .
Voters have to remember what to do with this 'winner takes all' been perpetuated by Taib.His politics of development is just a disguise to attract votes.We must change this gov't so that he don't bend rules ,shift goal post and break all laws.

Here comes another big white hair elephant project. Is there any justification for this $200m airport in the middle of nowhere? Taxpayers money down the gutter once again. Who gets to construct this airport. Open tender? For whom is this airport for? Emergency landing pad for planes flying between Kuching and Miri? A chopper pad for Mukah would be more appropriate. Maybe the Pehin is contemplating landing his hobby jet there. Building an airport in Mukah should be the least priority when other areas are in dire need of infrastuctures. Roads, electricity, water supplies are basic needs which is still very much lacking in many parts of Sarawak. High time our baleh YB and his PRS clowns use his "smart factor" to secure a road to Kapit or preferably upgrade kapit airport to accommodate jumbo jet...... to transport out the coal and contribute to further global warming.

hi there everyone.
wow wow. what happened to Malcolm's area of RM70 million ? Pedis isi tuai enti janji tinggal janji ajak. State election is around the corner, musn't forget that!
That is why Malcolm, a politician's life is not as you thought rosy and glamorous. That was why you missed your cue creating history in the Sate Civil Service as the Director of Agricultre Department. MAybe, we cannot blame you, you thought at that time, the cotton field was vast for you to harvest.
Another thing unggal blogger, it came out in the paper yesterday that the tombstone of one of the slain iban rangers in 1955 laid by the side of one of the roads in Perak, i suggest iban leaders take this matter into serious consideration.
Tq.

haha....kapit is not his place anyway... why he cares about people that mkn babi like ibans ?

I believe a lot of money is needed by Kapit and the sorrounding regions and should be alotted there to develop these areas. But what can anyone does? The people for support for BN which means for Taib is so solid by the leaders of Kapit and for that matter the whole of this State, so we have to wait for what crumbs falling from the master's table before we can take a bite. Remember the DBNA got 4 million Ringgit and yet the Bidayuh certain leader(s) is/are clamouring for at least Dy. Minister. The moral of the two stories is one and the same: you cannot have your egg and eat it at the same time. If you support Taib then you don't complain at all. Or else stop supporting Taib and have him removed from office, and the next time round the new leader, being new and not yet having two feet firmly on the soil, might want to listen to many people and including to the people of Kapit who needed the roads etc. For the moment, they have waited for 46 years, nothing is going away if they wait for another few more years, surely. And come next election because you want to get new roads etc for Kapit get Kapit people to help change Taib out. Fair?

no..all monies should go to mukah as Kapit in not melanau area but iban..

by the vote of the Dayaks, taib & the gangs control sarawak..

Dayaks does not deserved anything from BN...

Kapitians are satisfied that their son is a minister.
Mr CM Taib is only doing his part to prepare for a foundation for Mukah to be the State Capital in 20 years time. Official reasons: Mukah is in mid Sarawak and has deep sea port.

A responsible CM and an elected representative who really takes care after his constituency. Kota Samarahan was represented by him before and you could see the developments like mushrooms. Syabas DTK Patinggi!

How about our Iban elected representatives? How far they have developed their own areas?

Taib is a desperado in a bit to squeeze whatever resources is available before he is "leaving" the country and siphoning the wealth out and say good bye, so the poor next CM will suffer with dry coffer to manage.

moeny given by the federal governemtn? what a joke! these are sarawak people's money, iban money! How much money the they had already taken from sarawak's oil & gas resouces, the resources rightly belong to the people of sarawak! ..the only changes is the change of the colonial master from orang putih to the umno colonial master

Since i was borned, i am waiting for the costal road promissed by BN. When i was 12 yrs old, the surveryor came to Belaga and said this would be the mark for the coming highway to Kapit. But until now,bulu mata pun tak ada! Why Mukah should have that giant airport? Apa ada sangat sana? mas wing belum tentu dapat bertahan! siapa mauk pegi sana pakai 737 boeing???rediculous. What happen to Batang Ai road project?...no more as urgent and no more priority as mention by Masing? Kasih ke bala mayoh ba' Batang Ai enti terpaksa nganti sampai next election! Malcom do something or ou will be puppet!!!!

Dayak MUST continue to support BN so that their ancestral land or whatever they call it will diminish faster, so that no titles be issued to their land and that Taib and Awang Tanah can sell and steal their land.

In mukah there are clinic for every settlement area even with only 1 kampung.

These is so call politik development. Who strong win.

i agree politic is like rubbishes...but don't forget that politic also steer human developement...if you don't like rubbishes...throw BN out next election...inform all nembiak baru to register themselves & vote BN out...