I am now backed in Kuching after spending 8 days in Batang Ai observing the by-election conducts. And as far as our term of references (which is very limited) is concerned we are more or less done, 3 days before polling.

Why I said we are done, because there is nothing to observe anymore. What happen in the next few days will be of no different. Riggings in this by-election are rampant and sad to say that the words “CLEANS, FAIR & FREE ELECTION does not exist in Batang Ai by-election vocabulary.

Our report and photographs taken during our stint in Batang Ai have been compiled and submitted to our Head Quarters in KL.

1) During nomination day (29/3/09) we felt that the police should not have confisticated PAS flags, only returned after vehement protest from PKR. What puzzled us most was why the police allowed SUPP flags among the BN crowd. Report and photos taken during the incident has been submitted to HQ KL for further action.

2) BN candidate election posters were pestered a day before the nomination date. This is a gross defiance of the by-election conduct. We had taken photographs of those posters at Ng. Mepi longhouse. This was by no mean an isolated case because we found the same in other longhouses.

3) It was common sight to see BN giving away gifts of all sorts to the people in the constituency. We have pictorial evidences to that effect but I don’t think its wise me to disclose them here. 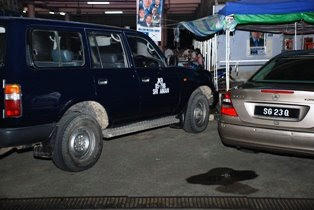 5) Civil servants, Departmental heads, teachers appears to be parts and parcels of BN election machineries. They are being deployed and mobilized to every longhouses and corners of Batang Ai.

6) MAFREL (Batang Ai) hereby confirmed the talks that “Tuai Rumah” or longhouse chief are being “kidnapped” and held hostages at Batang Ai Hilton. Some of those whom I met reveal that they are given RM1,000.00 pocket money during the duration of their stay. Some who chose to go to Kuching for sight seeing are given more. We observed that this is indeed very effective tools deployed by BN politician to entice voters. If not money politics, bribery what then?

7) As expected BN ministers continuously poured in “instant noodle projects and other goodies” virtually to all 121 longhouses in Batang Ai. As far as MAFREL is concerned, this is a daylight bribery. Again we have more than enough evidence to support our claims. It’s now up to HQ to make the necessary discloser.

8) Our monitoring unit reported that BN campaigners have contravened particular section of the by-election Act whereby they placed BN flags on the bridge and other prohibited places.

9) We also received report that BN supporters/campaigners pulling down PKR flags at the entrance of a particular longhouse. At the time of reporting police report has been lodged.

10) By MAFREL (Batang Ai) estimation the cost of this by-election far acceded the allowable amount of RM150K by contending parties.

12) We had examined and scrutinized the voter lists, found out that 111 years old voter still appear in the electoral roll. We checked with NRD and our trip to a grave yard confirmed that this particular voter died some 30 years ago. We have communicated our findings to the EC and believed that this is by no mean an isolated case.

13) We also received complaints from the longhouse residents that some of the names are missing from the electoral rolls. We are still investigating their claims.

14) Intelligence information received from the ground suggested that there will be more longhouses after the by-election. Reasons: Batang Ai by-election will cause a split among longhouse folks leading to the formation of new residence/longhouse.

15) In 1996 election, Donald Lawan successfully challenged Mong Dagang in the court as a result of practicing money politics. Will the 2009 Batang Ai by-election provides another same scenario of Jawah Gerang Vs. Malcolm Mussen, not only in Batang Ai battle field but also in court battle? NOT impossible if MAFREL (Batang Ai) reports and findings are anything to go by.

16) I must say within our term of references, the 26 Mafrel observers have done a splendid job as an election watch dog despite the numerous hurdles and handicaps.

COMPILED BY A MEMBER OF THE MAFREL TEAM
For more info, go to MAFREL's website > http://mafrel.wordpress.com/ 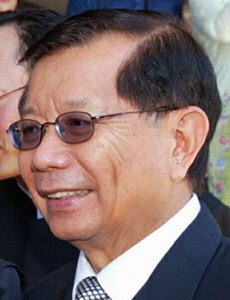 “The PKR leaders have been trying to change the federal government, and now the Sarawak state government. Do you think that if you have a good wife, you want to change her?”

What is said by George Chan is very true. But yet some YBs and even ministers have changed their wives even if they are good.

After being elected or appointed as ministers some Dayak YBs are having mistresses. This makes them vulnerable and earns them little respect from their own communities as well as other communities.

How can they look after the interests of their constituents? How can they become a role model? Many have changed the acronym YB, instead of Yang Berhormat, it becomes ‘Yang Bebini’ or ‘Yang Bekendak’.


3. Minister fails to turn up for his appointment

Awang Tengah Ali Hassan a.k.a Awang Tanah, senior vice president of PBB and second minister of planning and resource management was supposed to visit Rumah Jengin to campaign for the BN candidate, Malcolm Mussen on 2 April at 2.30 pm.

Some 50 villagers were waiting for him. There were also several reporters present to cover the visit. When he failed to turn up, State Assemblyman for Ngemah, Gabriel Adit who had arrived earlier at the longhouse to campaign for the PKR candidate, Jawah Gerang seized the opportunity and “hijacked” the event. He touched on issues including the unsettled claims of compensation for the Ibans affected by the construction of the Batang Ai hydro-dam and the NCR land issues.

According to Adit, the people responded enthusiastically and understood the message the PKR passed to the Iban community.

wow ... that is a plain slapped in the face of those dayak people in the long house.

all align with bn are this arrogant.

Poor dayaks not only they were taken advantage off but also despised.

Where are your pride Dayak people.

Where are your pride!!

Well done MAFREL. You may still need to be around on eve of polling day. That will be when Santa Claus comes passing by.

Congrates to the MARLEL boys for the job well done.AT least there are someone up there who could expose the BN dirty tactic and sinful acts.

YB George. You will be the last people allowed to speak about wife/husband relation.
Do not tell me you come clean in this avenue. If so, do advice your counterparts(other YBs on their extramarital/noctornul activities).

While in Lubok Antu yesterday, Jabu was asked about the rate percentage of BN chance of winning in Batang Ai by-election and he answered that BN has to work hard and we would know the result on the night of 7th April. The answer given by Jabu seems evasive contrary to what he had said three weeks ago in Lubok Antu, where he accused PKR was poor in political mathematics saying, " If the opposition had lost the last election in Batang Ai it was also going to lose in this coming by-election. " From his statement yesterday, we can construe it as Jabu knows that BN is going to lose or facing an uphill battle with PKR. Secondly, Jabu doesn`t want to be caught again in his incorrect calculation in political mathematics.

Yesterday event also saw Awang Tengah and his team were in Winston Bana`s longhouse at Nanga San. As they are " outsiders " I hope the ritual was performed before they were allowed to enter the longhouse. In his speech, Awang Tengah accused Anwar Ibrahim was only to keep his political survival rather than helping dayak. I would agree with him if Awang Tengah suggested that Anwar Ibrahim is still relevant in Malaysian politics or keeping himself active in politics. Awang Tengah seems to forget PKR has created an history where it won 31 parliamentary seats and 40 state seats in the 2008 general election, more than the seats won by his party PBB. As a leader of Pakatan Rakyat as well as the head of the opposition in Malaysian parliament, Anwar Ibrahim is commanding 81 MPs and 196 state assemblymen in the country, more popular than Awang Tengah.Is it fighting for a political survival? Why Awang Tengah did not tell the Iban in Batang Ai about the status of the land where their longhouses are occupying now, are the land state land or NCR land? As he said before, all land unsurveyed or without title belongs to government.

George Chan Hon Nam equated BN government to a good wife which the people of Sarawak will not want to change.

George Chan is a %#@ to the core and all women in Sarawak especially those who had supported SUPP should condemn him in absolute terms. He is a disgraceful leader to his party and to the chinese race.

I urge all Dayaks who had supported SUPP before to leave the party which has together with PRS,SPDP and PBB had betrayed our trusts for 45 years and we are what we are now for being the poorest ethnic group in Malaysia.

Vote out Taib and uproot all dayak leaders in BN. Vote Jawah Gerang and PKR for ketuanan rakyat.

Another good job done by Adit & Gang! Just seize whatever opportunity arises! Yup, that little thing is called “niche”… It does have impact, though!

Aki Josh Chan is one of them – I guest! These people are ego. Enda tan agi ney!

Why George Cahn talk about wife.He is not qualify to talk about this becos he is not a good husband.

He is such a thick skin man and he should resign as SUPP president.He has shame the chinese community.

Such a man, holding a high office can stood so low in public places.The sight of his action is enough to make me throw out.

And he talk about a good wife!He better go to learn how to be a better husband .

I dont think that all government servant are pro government. However, their legs, hands, and mouth are bound, but not their ears.

The Dayak being neglected in all area of developments; education, infrastructure...but yet there are still the strong fotress for BN Government to build their cronies.

For me, whoever stand on behalf of Dayak, and against the BN even though they are Indian I will vote for them.

This mafrel findings should be made public in order to have wide impact.

Posting in this blogspot would have minimal impact as few peoples could access to internet.

The peoples in Batang Ai in particular and in Sarawak as a whole have the right to know about this findings.

Whenever the opposition has small misconducts, BN would make a big issue out of it.

But whenever BN make BIG mistakes, it usually sweep under the carpet.

Come on Peter John, make mafrel findings go public, the sooner the better. By all means, escalate this findings in whatever media necessary.

Ha ha, what does George Chan know about good wives or even good mistresses?

Georgie, how could you say such a thing. Shame on you.

Peter John has to follow the procedure. He has to submit the report to his headquarters first for necessary action.

It is legal for a muslim to have four wives. But I don`t know whether an Iban can keep mistress.

There was a police case before a daughter of YB ran amok after her father`s mistress.